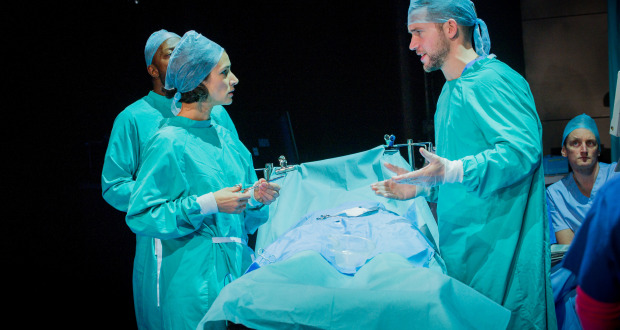 Pros: Strong writing and a skilled cast make this an entertaining and often moving production.

Cons: A few more jokes would lighten the sometimes-ponderous tone; the play sometimes struggles under the weight of its moral dilemmas.
Tiger Country, Hampstead Theatre – Review

Pros: Strong writing and a skilled cast make this an entertaining and often moving production. Cons: A few more jokes would lighten the sometimes-ponderous tone; the play sometimes struggles under the weight of its moral dilemmas. We expect our doctors to be passionless, logical and detached; but at the same time we value their human sensitivity. It's this dichotomy that's at the heart of Nina Raine's medical drama, revived at the Hampstead three years after its debut. Set in a busy London hospital, the play revolves around two main characters. The nominal lead is Vashti, the surgeon played by&hellip;

Sharp direction and script combine in a powerful, energetic medical drama that lays bare the contradictions and inadequacies of a busy London hospital.

User Rating: Be the first one !
We expect our doctors to be passionless, logical and detached; but at the same time we value their human sensitivity. It’s this dichotomy that’s at the heart of Nina Raine’s medical drama, revived at the Hampstead three years after its debut.

Set in a busy London hospital, the play revolves around two main characters. The nominal lead is Vashti, the surgeon played by the most recognisable cast member, Indira Varma. Tough, unremitting and fiercely controlling, she rides roughshod over all who get in her way: the sluggish Caribbean nurse, the clumsy junior Mark whose work falls short of her expectations: “All the patients see is the scar. Your stitching is my stitching.”

The real focus of the play however is Emily, played by Ruth Everett. She’s a provincial doctor who has just joined the A&E team, partly for career advancement and partly to join her boyfriend James, another doctor on the staff. She is at first exhilarated by her successes: the woman whose heart condition she correctly diagnosed, contradicting the consultant; the 24-year-old girl she saved due to an abnormal spot on her ankle.

But Emily becomes more and more perturbed by the ones she might have missed, the diagnoses she might have failed to make – and the mistakes she might make in the future. “You can’t be a perfectionist in a hospital,” her boyfriend declares, trying to get her to relax her workload; but Emily is overwhelmed by the onerous duty she has taken on.

Although set in an NHS hospital, the play is refreshingly short on polemic. There are references to shortages of beds, lack of necessary equipment on crash trollies, and inadequate equipment, explained not so much due to government failings, but instead internal hospital politics: “Look at the money they give to those bastards in chemotherapy”.

The tension and stress takes its toll on all the characters. James has long ago given up on the impossibility of maintaining the freshness and zeal that Emily feels the job demands: “Try not to care so much. Not to care about the doctors, not to care about the patients.” Mark feels so ground down by the whole process that he no longer runs to cardiac arrest calls: “You don’t get paid more if you work more. You don’t get paid less if you work less.”

Other than the four main characters, the rest of the cast portray a range of characters, including consultants, nurses, surgeons and ambulance drivers, as well as the constant stream of patients – the man who has fallen from a ladder, the woman who has gashed her head, the soap star who’s dying of cancer.

The play is tautly written and directed, with a sharp script performed flawlessly by a versatile cast of 15. Set in the round, the entire action takes place in several wards and operating theatres within the hospital, with expertly choreographed scene changes.

Tiger Country is a thoroughly professional and passionate drama that lays bare the complexities and contradictions inherent within the health service. But, for all the speeches, the set pieces and the battles, it doesn’t really tell us anything we don’t already know; that medicine is a stressful and sometimes morally ambiguous business, that hospitals are under-resourced, that it’s harder being a woman in the workplace than a man, and that doctors work antisocial hours. There are more moments of humour to be found in this piece where a lighter touch might have contrasted the genuinely dramatic scenes more effectively. But despite the somewhat overly heavy tone, this is an energetic and powerful production that ably conveys the reality of a health service stretched to breaking point.