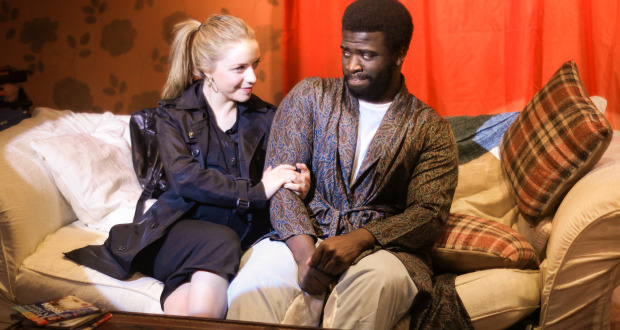 This is Not a Christmas Play, Top Secret Comedy Club – Review

Pros: A genuinely funny show performed by a strong cast with a talent for comedic timing, and some fine physical tomfoolery.

Cons: A somewhat ramshackle plot doesn’t detract from the comedy – but the noise of bar patrons and kitchens at the other end of the room make it hard to concentrate.
This is Not a Christmas Play, Top Secret Comedy Club – Review

Pros: A genuinely funny show performed by a strong cast with a talent for comedic timing, and some fine physical tomfoolery. Cons: A somewhat ramshackle plot doesn't detract from the comedy - but the noise of bar patrons and kitchens at the other end of the room make it hard to concentrate. How do you write a play about Christmas that isn't about Christmas? This, we're told, is the problem faced by troubled authors Robert Wallis and Liam Fleming. The answer, it turns out, is not to mention Christmas at all. And apart from the calendar on the wall&hellip;

An undemanding, knockabout comedy that makes for a short but entertaining night out. A professional cast adds a lot to the amusing script.

How do you write a play about Christmas that isn’t about Christmas? This, we’re told, is the problem faced by troubled authors Robert Wallis and Liam Fleming. The answer, it turns out, is not to mention Christmas at all. And apart from the calendar on the wall on which every day up to December 24th is crossed out, there’s no mention whatsoever of the festive season in this entertaining comedy – other than in the title.

The play is based around former university friends Tim and David, who share a flat. David goes out to an unspecified job, while Tim stays at home devising his bizarre, complex board game that involves a trainer, an eggbox, a length of rope and a potato peeler. David is eagerly awaiting the arrival of his ex-girlfriend, Sarah, for whom he is making an extravagant meal, while trying to persuade Tim to go out for the evening. Tim doesn’t really get the whole girlfriend thing – “Some of my most fulfilling relationships have been figments of my imagination” – and refuses to get dressed (he spends the whole play in pyjamas and dressing gown) or leave the flat. When the doorbell rings while David is cooking, Tim answers it to reveal not the expected Sarah, but Clive, a bearded census-taker, who later reappears as both a singing pizza delivery man and an insurance agent. It turns out he’s really a male stripper: “Improv. I’m a committed method actor.” Playing a pizza delivery man? “It might not be Hamlet, but it’s a role”. The circuitous plot involves the appearance of a heavily pregnant Mary – the only seasonal reference –  whom Tim mistakes for the expected Sarah, but who, along with Clive, turns out to be merely a burglar intent on stripping David and Tim of anything of value they might own.

It’s a drama of high comedy, performed by four competent actors, with many genuine laugh-out-loud moments in its taut script. There are some ingenious and often surreal plot twists, such as the potato peeler becoming a fearsome weapon; but there are also some plot devices that are unaccountably dropped, such as the board game which features in the first scene but which thereafter is not referred to at all.

The venue is the basement of a pizza restaurant, sharing its space with a bar, at least half of which is occupied by a full-size table tennis table. Only a thin curtain divides the bar from the theatre space, and no attempt is made to mute the bar clientèle during the performance; this means that there are constant interruptions from the chatter of both bar staff and patrons, and the clatter of washing-up from the kitchen. The space is more regularly used as a comedy venue, and it would take a very strong play indeed to be able to overcome these constant interruptions.

Venue aside, the play is well written on a line-by-line level, although it would benefit from a stronger story arc. But it’s entertaining enough and is ably performed by the uniformly strong cast. It deserves a venue more suited to a scripted performance.