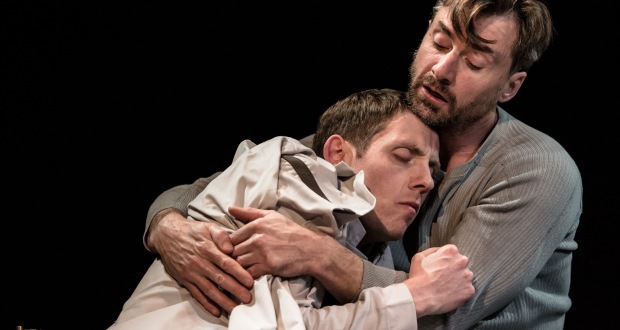 Pros: The Finborough’s limited space has been convincingly transformed into an interrogation room thanks to designer Petra Hjortsberg. The chemistry between Graeme McKnight and Matthew Thomas as the captive and captor respectively, successfully holds the audience’s attention.

Cons: The torture that captive Gavriil receives during his confinement are underplayed and we never really feel that he is as frightened by his reality as he perhaps should be.

Set in 1978 in the USSR, young writer Gavriil (Graeme McKnight) has been captured and imprisoned for his socialist views. Gavriil is hungry for banned literature and with access to the prison’s library, he is able to access these including Yevgeny Schwartz’s The Dragon. In Eve Leigh’s first full-length play, the captor and the captive bond over a shared love of literature, making their ‘interrogation sessions’ much more comfortable than they’re supposed to be.

Gavriil’s ability to tell a captivating story entrances his therapist Yurchak (Matthew Thomas) so much that they both eventually forge an unlikely friendship. Yurchak reveals to Gavriil that he is married with children and fears what will happen to him and his young family if their bizarre friendship is discovered. The play touches on Stockholm Syndrome where a bond is formed between the captor and the captive demonstrated in each session where instead of counselling, Gavriil discusses the latest book he has read. However as the sessions continue, Gavriil starts to take more risks, eventually ripping a piece of script from a restricted book and bringing it to their meeting. He eventually realises the extreme danger he has put them in when a guard walks in and he is forced to eat the piece of literature in order to stop them both from being punished.

Under Tom Mansfield’s direction, the eighty-minute play is steadily paced and although we get a hint of what Gavriil’s life is like outside the interrogation room, including a scene where he can barely walk after being electrocuted all evening, this is never fully explored or explained in depth. Though the message of the overall play is clear, this torment that Gavriil ’s experiences outside Yurchak’s presence could somehow have been made more significant. The metal floor of the room adds to the cold, hostile environment and the tension that builds towards the end of the play keeps the audience engaged throughout. Both Matthew Thomas and Graeme McKnight give sterling performances, emphasising that during trying times we often form a bond with those we least expect in order to feel some compassion.

Works for in Central London as a Press Officer. Having been brought up in a small town deep in the Welsh Valleys, Laura completed an English degree and a Magazine Journalism Postgrad and eventually moved to London to live her dream of working in the theatre. Spending many years as an avid Alan Rickman and Harry Potter fan (we defy you to find someone who knows more about the series than her!), she ventured into the ‘Muggle’ theatre world by accident during a free afternoon in London. She spends most nights in London attending various productions while volunteering at several theatres as an Usher and Press/Marketing Assistant. She currently resides in London.