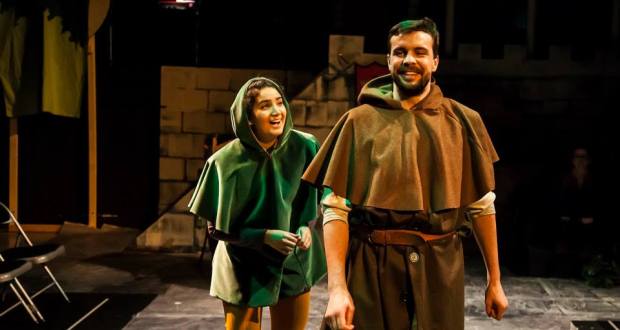 Pros: An imaginative and radical retelling of a famous tale

Pros: An imaginative and radical retelling of a famous tale Cons: Music misses the mark more often than it hits ‘Tis the season of the pantomime, the umpteenth retelling of Cinderella, Jack And The Beanstalk and, yes, Robin Hood. But don’t expect your run-of-the-mill pants from the merry men of Greenwich and Lewisham Young People’s Theatre, who turned the concept of their Robin Hood pantomime production into something fresh and different. Their adaptation is a thoroughly modern musical, which tells the ‘herstorical’ tale of Robin and his band of thieves with a major twist. It's full of feminist revisionism, asks questions&hellip;

‘Tis the season of the pantomime, the umpteenth retelling of Cinderella, Jack And The Beanstalk and, yes, Robin Hood. But don’t expect your run-of-the-mill pants from the merry men of Greenwich and Lewisham Young People’s Theatre, who turned the concept of their Robin Hood pantomime production into something fresh and different.

Their adaptation is a thoroughly modern musical, which tells the ‘herstorical’ tale of Robin and his band of thieves with a major twist. It’s full of feminist revisionism, asks questions about gender normativity and kicks the patriarchy where it hurts. All this, and performed by only three cast members who are constantly bolting on and off stage to replace their jerkins and change their hats.

You may think you know the uber-famous, often adapted story of the man who stole from the rich and gave to the poor. Maybe it’s the Disney version that’s stuck in your head, with all those cute little anthropomorphic animals and Little John’s catchy tune. Or maybe it’s Alan Rickman’s villainous Sheriff of Nottingham that you think of. Well, if we are to believe the pant’s writer Brendan Murray, those versions are far, far from the truth.

Frills of felt in varying shades of green deck the auditorium to create a woodland setting, and a crenellated castle façade plunges us into the past. We are in medieval times; the bumbling old Sheriff of Nottingham is being forced to raise taxes and his daughter Maid Marian is sick of the male-dominated environment she lives in. She doesn’t want to do tapestry, she wants to shoot arrows. So she creates an alter ego for herself: Robin Hood.

Scott Ellis doubles as comically evil Sir Guy of Gisborne and country ruffian Little John; Euan Nixon is the camp Nursie and the hapless Sheriff of Nottingham. Both of them admirably switch between their parts and ad lib to great effect when things go a little off track. Filipa Bragança plays Maid Marian, constantly whingeing at her dad, and then dons a green costume to become Robin Hood. The cast does a great job of maintaining the high doses of silliness and vim that are necessary to keep an audience full of kids entertained.

Oscar Wood’s songs add an extra element to the show. A couple of them are good – especially one about being caught between a rock and a hard place, which gets an enthusiastic round of applause from the audience. Still, the lyrics are often laboured and voices sometimes get lost in the high ceiling of the Tramshed’s space. But a chorus of children, themselves adorned with leaves like a band of dryads, are a sweet accompaniment and they keep the songs moving along with smiles and vigorous hand actions.

Murray’s writing is surprisingly blue considering the young audience. Innuendos abound – like the Sheriff’s ‘squeezed assets’ and the reason why Little John got his name. The production certainly doesn’t take itself too seriously, always commenting wryly on the fact that characters keep breaking into song and revelling in the ramshackle proceedings.

Retellings of classic fairytales are all the rage these days: Maleficent, Wicked, Alice In Wonderland, but this low-key affair is unique in its cheeky, occasionally ribald and funny retelling of a famous story.