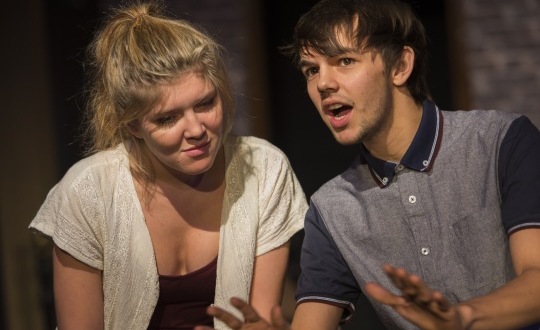 Cons: A slight delayed start is the only con, and this was owing to bad traffic so not in anyone’s control!
Apartment 40C, London Theatre Workshop – Review

Pros: A truly talented cast bring this new, fantastic, musical alive. Cons: A slight delayed start is the only con, and this was owing to bad traffic so not in anyone’s control! The London Theatre Workshop is located above the Eel Brook Pub, just 10 minutes’ walk from Fulham Broadway tube station. As I was there early I had dinner in the pub, which is definitely worth a visit, the food was gorgeous and the lovely atmosphere put me in perfect frame of mind for the show. A friendly greeting at the theatre door set me up for a&hellip;

You will struggle to keep the smile off your face after seeing this bittersweet, sensitive and heartfelt musical full of life, laughter and love.

The London Theatre Workshop is located above the Eel Brook Pub, just 10 minutes’ walk from Fulham Broadway tube station. As I was there early I had dinner in the pub, which is definitely worth a visit, the food was gorgeous and the lovely atmosphere put me in perfect frame of mind for the show. A friendly greeting at the theatre door set me up for a great evening, even the slightly delayed start didn’t dampen my spirits!

I was not disappointed by Apartment 40C, and as we approach the end of the year I’d be as bold to say this is one of the best things I’ve seen in 2014. Flawless isn’t a word often possible to apply to theatre but this musical comes close. The very clever plot, the set, the musical numbers, the cast – all elements of this production were close to perfect.

I’ll start with the plot, which left me with tears in my eyes and a big smile on my face as I left. On the surface this is a musical about relationships, which could so easily fall into many clichés. However the story of each of three couples is woven together in an incredibly clever and unexpected way, with a revelation half way through linking all the stories together.  All three take place in the same flat, but at different times. A young girl moves into her new flat to find a guy who also believes he’s renting this flat, a couple who’ve been together for 10 years and are struggling with life changing decisions and an older divorced couple reuniting to decide whether to sell their flat.

The majority of the cast are on the set at the same time, however it is always clear which couple’s tale is being told through clever use of lighting and the disciplined cast holding positions on set.  The plot is driven through the fantastic use of lyrics and music. Songs with the cast overlapping each other were a thrill to watch and powerful solos showing an individual characters particular struggle brought tears to my eyes.

The cast were absolutely stunning. It is not often you see a musical with no weak link. All the cast had phenomenal voices and the acting skills to match. This only enhanced the plot and made me completely engrossed throughout.  Lizzie Wofford as Kate had a stunningly sultry and jazzy voice, Alex Crossley as Katie had a voice so powerful it felt overwhelming in such a small theatre and Nova Skipp as Kathryn sang with such heartfelt emotion I was in tears during ‘A Child’. The three men in the show also had fantastic voices; each telling their stories with such raw emotion and honesty it was refreshing.

The set perfectly captures the idealised image of a New York City apartment with a bare brick wall and quirky accessories, including a very clever display of light bulbs. All these factors work together to create a very professional and exciting production.

As a lover of musicals, and any romantic story with true heart and depth, I was completely besotted by this show. However I think even someone who considers themselves to not be a fan of musicals would appreciate the stunning, West-End worthy, talent on display in all elements of this production. Taking all this into consideration I had to give Apartment 40C 5 stars. I’m still struggling to wipe the smile off my face after seeing this fantastic show.