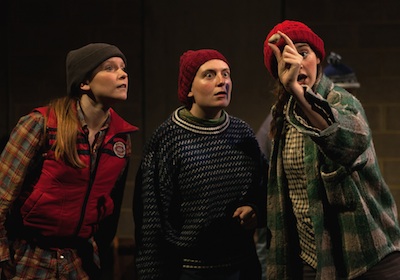 Pros: A practically perfect production, with fantastic acting and a clever set touching on a number of serious themes without being too heavy going.

Cons: It is rare to struggle to find a con…the theatre is almost too small for this production, not because they need more space to perform but because it deserves a bigger audience
The Pearl, Battersea Arts Centre – Review

Pros: A practically perfect production, with fantastic acting and a clever set touching on a number of serious themes without being too heavy going. Cons: It is rare to struggle to find a con…the theatre is almost too small for this production, not because they need more space to perform but because it deserves a bigger audience Adapted from John Steinbeck’s novella of the same name The Pearl, created and performed by Dumbshow Theatre, is a beautifully crafted and effortlessly performed play touching on a number of themes including love, loss, greed and social immobility. The story is told&hellip;

An incredible script moved effortlessly to the estate to create a charming and picturesque piece of drama that can be enjoyed by anyone.

Adapted from John Steinbeck’s novella of the same name The Pearl, created and performed by Dumbshow Theatre, is a beautifully crafted and effortlessly performed play touching on a number of themes including love, loss, greed and social immobility.

The story is told by the people who live on the beach, people who have moved there to hunt for the infamous pearl. On arriving into the theatre, the actors greet the audience and introduce them to Flotsam Beach and show them some of their wares – old boxes, ropes, boots, and much more. They tell the story of The Pearl of the World, and how they have realised during their time at Flotsam that the last thing they actually want to do, is actually find that pearl. Using the items washed up on the beach, they tell the story of how the pearl was first found and the tragic results of such a find.

The story is that of pearl diver Kino and his wife, Joanna, a couple with few possessions, imprisoned by poverty and destined to be forever poor. Kino believes that if he finds a perfect pearl, all of their problems will be solved. Unfortunately when he finally gets his wish, the hope and promise of having such a valuable item evaporates and turns to greed and sadness.

The tale is told by the beachcombers who take on the roles of the other characters in the story – the doctor, pearl buyers, neighbours, friends and enemies. It is almost like it is being told to a group of friends or family around the campfire, the beachcombers use items found from the sea to recreate sea creatures, Kino’s boat and the baby. They use these props so effectively that it is easier to suspend disbelief and see the things they are creating.

The script is a piece of art, the words perfectly and painstakingly chosen to get exactly the right feeling across. This play is heart warming, heart wrenching and inspiring – this is easy to watch but filled with interesting and thought provoking imagery and themes. The language is poetic and yet easy to listen to and understand, flowing with ease from the cast, often finishing each other’s sentences. The actors work flawlessly together, throwing props to one another and moving seamlessly.

Despite being very serious towards the end, this tale is beautiful and also has a number of rather humorous moments; the darkness interweaved carefully to create a perfect juxtaposition. When I saw the large group of school children entering the theatre, I was a bit worried that this was going to be a production very much aimed at drama and English students for analysis purposes – and when this is the case, it can often be slightly heavy going on the clever use of physical theatre or other theatrical elements. This production is, without doubt, something that anyone with an interest in drama, English literature, politics or Steinbeck should see but can also be enjoyed and understood by anyone else. At the end I sighed and left just thinking what a lovely play it was and that I will most certainly be going to see another Dumbshow Theatre production.

Finally, along with it being a beautiful story, lovingly written and impeccably acted, the audience are treated to a fact or two. Did you know that if you find a wellington boot on the beach in the UK it is most likely to be the left one? Due to the shape and the tide, we get the left and the right drifts to Norway. Who knew?