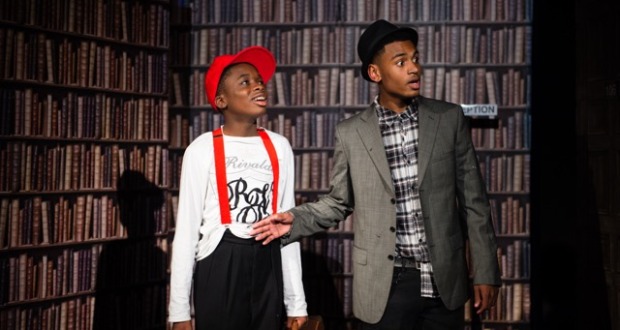 Pros: The charisma and spontaneity of the performers. Great use of Cliff Richard’s Devil Woman.

Cons: The set could have been less fiddly, and the temperature in the church several degrees higher.
Taming Who, St Saviour’s Church – Review

Pros: The charisma and spontaneity of the performers. Great use of Cliff Richard’s Devil Woman. Cons: The set could have been less fiddly, and the temperature in the church several degrees higher. Let me get the small print out of the way first. Intermission is a church-based theatre company that engages young people from inner-city communities who are at risk of offending, or who lack opportunity. But you can, if you like, forget all that good stuff, because this is a show that stands entirely on its own merits. Taming Who is set on a university campus, during Freshers’&hellip;

An energetic and very funny show that does Shakespeare proud.

Let me get the small print out of the way first. Intermission is a church-based theatre company that engages young people from inner-city communities who are at risk of offending, or who lack opportunity. But you can, if you like, forget all that good stuff, because this is a show that stands entirely on its own merits.

Taming Who is set on a university campus, during Freshers’ Week. Hormones are in the air, and the hottie on every boy’s mind is Bianca. But she and her girlfriends won’t let Bianca’s fiery sister, Kate, get left behind in the romantic stakes, however much Kate may protest. What follows is, broadly speaking, The Taming of the Shrew, but writer/director Darren Raymond has done an astonishing job of bringing the story to life with and for the cast. The script is a hybrid of the original text with a ‘street’ version of the same – Shakespeare’s ‘coz’ alongside today’s ‘bruv’ – and the Shakespearean text ends up sounding just as ‘street’ as the other version. These young actors have not just reinterpreted the text, they have truly claimed iambic pentameter for their own.

This is a really boisterous production, to which the actors bring a lot of their own personality without compromising the balance of the ensemble. There is endless physical comedy, really impressive comic timing, and a stream of good-natured gags at the expense of black youth culture. Out of a very talented cast I have to highlight Eddie Thompson, as Tranio, and Kosi Okoli, as Grumio. Thompson’s Tranio is a lanky goofball in a backwards cap and rapper chains, whose badass swagger masks a sharp brain and a gentleman that you could, in fact, take home to meet your mother. Okoli’s Grumio has a thick African accent and is in a perpetual state of open-mouthed horror at Petruchio’s plans. Okoli is a natural comedian who would not be out of place in a West End farce.

The pace of the action meant that it was sometimes difficult to understand every word of the dialogue, and I would have welcomed a bit more variation in the tempo. It was fast and furious all the way through, and a few moments of relative calm would have given the audience time to breathe, even if the cast didn’t need it. The set, as might be expected, was fairly basic but it was versatile and effectively conjured a few different settings. If anything, it could have been simplified.

Intermission have cleverly side-stepped the supposed misogyny of the original play. In this version there is never any suggestion of Kate being compelled to go anywhere with Petruchio. Although we still have Petruchio manipulating Kate, by withholding food and getting her to agree that day is in fact night, it’s clear that by this point she is quite taken with him; she plays along because it suits her to do so. In the penultimate scene, Kate does indeed tell her crew that ‘A woman moved is like a fountain troubled, Muddy, ill-seeming, thick, bereft of beauty’, but on the other hand, Petruchio finds that he cannot bring himself to degrade the woman he loves. And in the new final scene, it is made very clear that this will be a marriage of equals; Kate has ceased to be a shrew, but that’s not to say she’s tamed!

It is a long time since a performance made me laugh as much as this did. Intermission has managed to harness the considerable energy, charisma and creativity of this cast, in a show that is not always slick, but is clever, professional, hilariously funny and firmly rooted in the original text. Under cover of laughter, the script also succeeds in planting a few ideas about the evolution of language, the deceptiveness of appearances and the pressure to conform to stereotypes. The noble community mission of this company is comfortably matched by its artistic achievements.