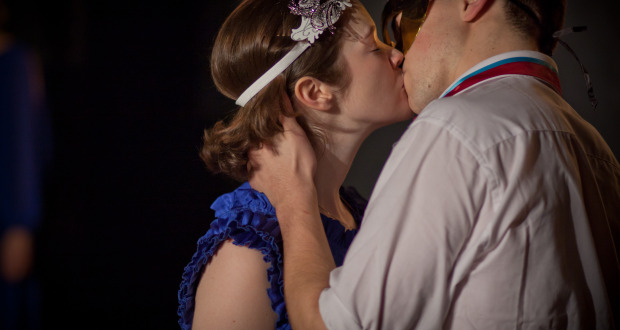 Pros: A fantastic cast and a lovely venue.

Pros: A fantastic cast and a lovely venue. Cons: The fight scenes are a tad long. London Theatre Workshop’s performance of Romeo and Juliet aims to breathe freshness into a play that most of us are unusually familiar with. But rather than resorting to off-the-wall conceptual ideas or an unexpected setting, this production keeps things simple. Instead, innovation and freshness are introduced by subtle touches; the fluid moving of furniture around the stage to change scenes and the use of the actors themselves as props. Instead of gimmicks, the production relies on the acting talent of the eight-person cast.&hellip;

User Rating: 4.5 ( 1 votes)
London Theatre Workshop’s performance of Romeo and Juliet aims to breathe freshness into a play that most of us are unusually familiar with. But rather than resorting to off-the-wall conceptual ideas or an unexpected setting, this production keeps things simple. Instead, innovation and freshness are introduced by subtle touches; the fluid moving of furniture around the stage to change scenes and the use of the actors themselves as props. Instead of gimmicks, the production relies on the acting talent of the eight-person cast. And they are terrific. Most of the actors play multiple characters, so even the minor characters are very strong. I was particularly impressed by Daisy Ward’s charming Juliet. She is childlike, giggling, yet just grown-up enough to stop this from being cloying. Romeo, on the other hand, is self-involved and slightly sullen. This might conflict with some people’s idea of the famous couple’s perfect love, but for me, it makes sense. Romeo is older and begins the play in love with another woman, so from the very beginning, as he pines for Rosaline, we see that he is melodramatic and self-centered. Making Romeo slightly less sympathetic than usual only serves to emphasise Juliet’s innocence and sweetness.

London Theatre Workshop is based in a small, dark room above the grand old Eel Brook pub in Fulham. From the warm and welcoming pub, you climb up an enticing spiral staircase to reach the performance space: a small and intimate room. Romeo and Juliet skillfully makes use of these close-quarters to draw the audience into the play. Often, speeches and asides are spoken directly to the audience and the cast go as far as addressing or pointing out particular audience members at times. I found this surprisingly natural, not jarring or embarrassing (as it easily could have been). The only disadvantage to this cosy theatre space is that we could hear the pub downstairs at times. Luckily, the noise was muffled enough to not really be a problem – and I presume that Romeo and Juliet was disturbing the pub-goers downstairs more than they were disturbing us!

The set is minimal: a collection of plain wooden furniture pieces that are wheeled into place to create different scenes. However, the cast themselves become part of the staging, and are often on stage whilst out of character. I particularly liked the balcony scene. As Romeo tries to reach Juliet, who sitting atop a movable bench, she is swung away from him. Slowly, the other actors make a bridge out of chairs that Romeo scrambles over to reach his love. At other times, members of the cast physically pull Romeo and Juliet away from each other: a visual representation of fate separating the lovers.

Another nice touch is the cast tapping and beating out rhythms on props or parts of the set to gradually build atmosphere and tension. During Mercutio’s famous ‘Queen Mab’ speech, the rest of the cast slowly begins to tap out rhythms, building up to a frenzy that perfectly matches the intense speech. I also loved the first fight scene. The Capulets and Montagues meet with lots of pushing and shoving – a very aggressive, bodily fight that works well to show the pent-up aggression on both sides. However, some of the later fight scenes were a bit long and the physical shoving wasn’t as well suited. The desperate clash between Romeo and Paris, for example, could have been a bit more dignified.

Overall, this is a very compelling production: accessible, easy to watch and surprisingly funny – although director Brandon Force does well to avoid playing the script for laughs. This delightful performance had me grinning for most of the evening. And if I wasn’t smiling by the end of the final act, that’s hardly a criticism.