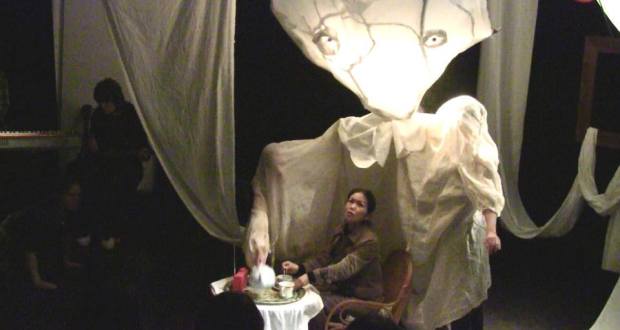 Pros: Full of interesting ideas and energetic performances. Cons: Several elements clash and need a lot more work.  From the moment you enter the muslin-curtained little world of Mrs Horton’s Finger to take your seat among the stools arranged haphazardly inside, you know this is going to be something rather different from the norm. After a long, pregnant silence sitting nervously in the dark, unsure of which direction to face, a soft and mysterious disembodied voice echoes around the space, the voice of a woman who seems as unsure of what is going on as we are. Then enters&hellip;

An engrossing piece of work-in-progress devised theatre, filled with fun and creative promise.

From the moment you enter the muslin-curtained little world of Mrs Horton’s Finger to take your seat among the stools arranged haphazardly inside, you know this is going to be something rather different from the norm. After a long, pregnant silence sitting nervously in the dark, unsure of which direction to face, a soft and mysterious disembodied voice echoes around the space, the voice of a woman who seems as unsure of what is going on as we are. Then enters our guide, the delightfully dotty Carmella (Benedict Hopper), bright red wig and colourful dress making her look like an oversized ragdoll, welcoming us into her weird and wonderful world.

Inspired by the surreal works of Leonora Carrington, Dirty Market have created a wilfully bizarre collection of colourful characters and unsettling stories. The piece explores the themes of senility, rebellion and childlike curiosity, centred on the aged Mrs Horton’s journey after her abandonment in a nursing home run by the sinister Dr and Mrs Gambit. Mrs Horton herself is never seen, but as an audience we are made to feel as if her journey is our own, thus putting our feelings of delight, confusion and dread at what we witness into an all-too-fitting context. Our senses are engaged on several levels: bursts of light and colour, unsettling and whimsical music, and even sweet treats are all on the menu. Indeed, coupled with their signature bricolage environment, Dirty Market create a sense of immersion rarely achieved by companies without the obscene budgets of Punchdrunk et al.

The show is littered with ideas, many of which really manage to capture the imagination. The one I personally found the most affecting involved two people washing and clothing a loose bundle of twigs representing an elderly, infirm relative. It is a wonderfully absurd and rather amusing piece of simple puppetry, and the perfect example of how something so silly can actually contain profound emotional depth – through the laughter I felt pangs of sorrow, pity and even guilt at seeing this image of a broken old women handled with callous neglect, an image that will stay with me for a long while.

Another very interesting moment involves the audience being lead from the space behind a curtain, there to witness the disturbing dance of the ‘Winking Nun’ (Jon Lee), overlaid with the narration of her equally disturbing history by Oscar Gibbs. The sequence is very engaging, but the movement sequence itself straddles the line between disturbing and comical, and could benefit from further work and a bit more subtlety. Similarly, many of the characters feel like they are either missing a dimension of complexity or perhaps had a few too many.

There are of lot of enjoyable performances, with particular mention for Shana Mongwanga, who imbues her characters with captivating warmth, as well as for Hopper’s Carmella. The music, too, really is one of the most enjoyable aspects of this production, and much credit must go to composer Nick Rye who, along with Rebecca Thorn’s hauntingly beautiful voice, creates a brilliant soundscape which keeps engaged with the piece throughout. The only downside to this is that one often can’t entirely follow what the performers are saying, particularly if sitting near the band (as I was), a technical aspect the company will have to consider when developing this project further. There are nice little touches throughout that make the audience feel all the more part of something magical (the riddles included in the programme, for example), and with some work on the characters and tweaking of the overall structure, this show could develop into something truly special.