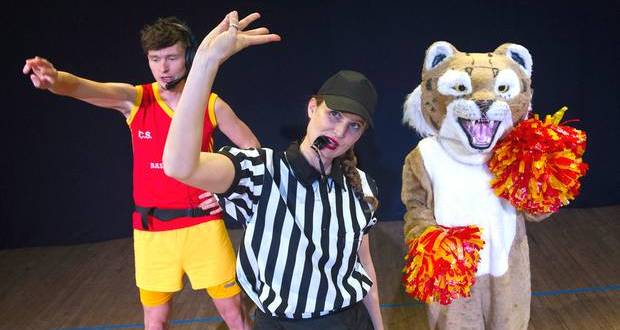 Pros: Hugely fun, eccentric and thought-provoking – plus freebies and audience participation! Cons: Fairly unconventional and not for people looking for a standard theatre experience. There I was. 11 years old. Standing on a stage in front of hundreds of my schoolmates. Dressed in nothing but a bed sheet wrapped around my waist. Staring down Titch, the shortest kid in class, equally naked, equally wondering what the hell he was doing. I had directions: run at him, grunt some racist Japanese mimicry, then toss him over my head. Where he was to land, I did not know. Forsooth, I&hellip;

An imaginative and original piece that cleverly uses a sparse cast to great effect.

User Rating: Be the first one !
There I was. 11 years old. Standing on a stage in front of hundreds of my schoolmates. Dressed in nothing but a bed sheet wrapped around my waist. Staring down Titch, the shortest kid in class, equally naked, equally wondering what the hell he was doing. I had directions: run at him, grunt some racist Japanese mimicry, then toss him over my head. Where he was to land, I did not know. Forsooth, I did not care. And now I stood sweating, stomach rumbling like an I’m a Celebrity wantaway, oriental eyeliner running down my cheeks – dirty knees – that un-PC rhyme might finally come true – dirty backs of knees more like, as my insides prepared to trickle away…

The pressure of being a prepubescent comedy sumo wrestler was, thankfully for me, short lived. For high school sweethearts Tyler and Connie – played by the magnificently energetic Action Hero team of Gemma Paintin and James Stenhouse – pressure is something they have to deal with every day. This was Hoke’s Bluff at Shoreditch Town Hall, a production set in small-town America about a teenage sports hopeful and his cheerleader girlfriend. Yes, I know… the setup sounds about as original as a Bob Geldof-produced charity single. Maybe Bono will emerge as one of the cheerleaders, I thought to myself. He gets bloody everywhere.

In fact, it was highly original. And there was a Bono-free cast of just three actors, who doubled up as Coach, bezzies, sports commentators – this could have been a mess but it all worked well. A reason for this success was the clever use of the audience as extra characters: at one point Coach would start berating a bemused face in the front row, even soliciting a nod from them with the question “Do you understand?” These moments added a great spark of humour to an already uplifting experience.

Indeed, the nature of the venue – large space, wooden flooring – made you feel like you were at a basketball match; Tyler and Connie’s story was told almost as if it were a sports report, broken up by a referee (Laura Dannequin) garbling nonsensical sporting terminology. Every so often a furry mascot was on hand to gee up the crowds, and at times even dished out free popcorn and T-shirts to some lucky revellers. I hadn’t felt this well-looked-after since I stumbled into a FIFA board meeting. I just wish Sepp Blatter hadn’t done that striptease at the end.

All in all it was a surreal comment on life and society, both touching and mysterious with a hint of the Donnie Darkos about it. The fact that the (very accomplished) actors spoke in British English despite the play’s Americanness added to its oddness, and the melancholic story that emerged really did pull at the heartstrings (helped by a sumptuous pop soundtrack). At the end, it all boiled down to whether Tyler could handle the pressure – something I had to face all those years ago. I don’t remember what actually happened on that fateful night. All I know is that I now have an inherent fear of Wagamama’s.