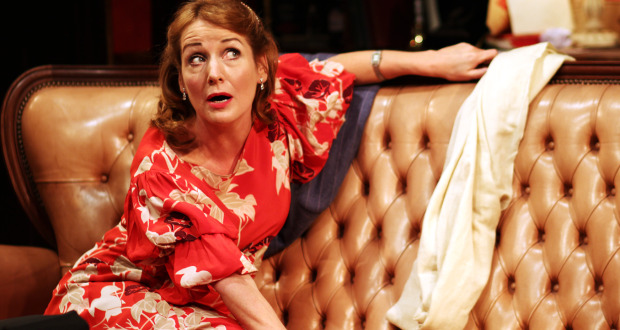 Pros: Some very pithy and quotable dialogue provides moments of enjoyable comedy that can be appreciated by people of all ages. A fantastic set with excellent detailing and an atmospheric, jazzy soundtrack.

Pros: Some very pithy and quotable dialogue provides moments of enjoyable comedy that can be appreciated by people of all ages. A fantastic set with excellent detailing and an atmospheric, jazzy soundtrack. Cons: Lacks any stand out moments and some characters are underdeveloped. Terence Rattigan was one of the most celebrated writers of the mid-twentieth century, enjoying success in theatre, on screen and on radio. His work is regularly revived on stages across the country, and his play The Deep Blue Sea was translated into a critically acclaimed film in 2011, to coincide with Rattigan’s centenary. What is perhaps&hellip;

A pleasant, if not stand out, play and production.

User Rating: Be the first one !
Terence Rattigan was one of the most celebrated writers of the mid-twentieth century, enjoying success in theatre, on screen and on radio. His work is regularly revived on stages across the country, and his play The Deep Blue Sea was translated into a critically acclaimed film in 2011, to coincide with Rattigan’s centenary. What is perhaps surprising, then, is that amongst these various productions you will not find one of First Episode – the piece with which he made his professional debut and for which he received rapturous applause – since the one revival it enjoyed in 1938. That is, until now. Tom Littler’s Primavera production company have returned First Episode to the stage at the Jermyn Street Theatre – just around the corner from where it made its West End debut at the then Comedy, now Harold Pinter Theatre.

Feel good jazz lilts around the cosy theatre as the audience members take their seats, complementing the warm lighting, the old books, wood panelling, gramophone and curios dotted around the set; they combine to lull the audience into feelings of warm, smokey nostalgia for a time that most never knew. Is that a taxidermied guinea pig? A helmet that once belonged to a suit of armour? The level of detail in the set design is glorious.

It is Trinity Term at Oxford University and four final year friends prepare for final exams whilst embarking on general ‘boys will be boys’ activities: gambling, parties, women, sport. Two of the friends, Bertie and Tony, are producing a production of Shakespeare’s Antony and Cleopatra with the Oxford University Dramatic Society, drawing two women into their tight knit circle in the form of Margot Gresham, a famous star of West End and screen fame, and Joan Taylor, a young lady of questionable intellect and acting ability but widely praised for her beauty. What ensues is an interesting, if slightly rough, exploration of love: the difference between the passionate, all consuming and ultimately fleeting love of 20 year old Tony for his idol, the notably older Margot Gresham; what love means to Margot, defined by years of experience and hurt; the struggle of David’s sexual feelings for Tony; the love of male companionship and the lines between sex and love, and how these were changing for women of the time, in no small part due to Freud’s popular theories. Fans of Rattigan will notice that these themes would carry through his work for the rest of his career.

Adam Buchanan’s interpretation of the loveable ass, Bertie, is fantastic. His role as the sort of Jiminy Cricket of the house, all awkwardness and thoroughly good nature, is portrayed with great believability and sincerity. It is with equal skill that Phillip Labey plays the contrasting David, with all his cool, aloof cynicism and affected worldliness. He does very well to keep the character’s repressed passion for Tony bubbling under his whole performance, allowing the audience a little sympathy for a character that would otherwise be very dislikeable.

Caroline Langrishe’s Margot Gresham is less successful. Langrishe struggles to communicate the film star status of Gresham, instead, it seems her best years are behind her, with looks fading and insecurities growing- more Blanche DuBois than Peggy Ashcroft, on whom it is widely believed the character of Margot was based.

The cast makes the most of a script that, somewhat inevitably considering it was written while Rattigan and his generously appointed co-author Philip Heimann were still at Oxford University, lacks depth and finesse. The impact it had as a hugely controversial piece when it was first released has disappeared, and it is now a very safe and restrained portrayal of the kind of upper class, Bright Young Things that people like to believe still swagger around the corridors of Oxbridge colleges. Although it is not a production that will stick with me for years to come, it does allow the audience to indulge in a gentle chuckle and some warm nostalgia – a very pleasant evening.

After spending four years in Edinburgh, ostensibly gaining a History MA but really scampering around the arts scene via radio, writing and performing, Madeleine moved to London to get a ‘proper job’. Now working in politics, she enjoys spending her free time roaming around London's many theatres, pretending to be Sylvie Guillem in ballet classes and sampling as many restaurants as possible.