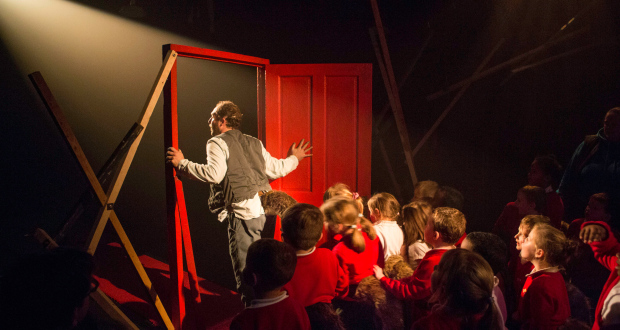 Pros: Atmospheric and evocative. No expense had been spared on the deer tails handed out to the audience.

Cons: Became a little repetitive, and ended with a whimper, rather than a bang.
Dusk, The Young Vic – Review

Pros: Atmospheric and evocative. No expense had been spared on the deer tails handed out to the audience. Cons: Became a little repetitive, and ended with a whimper, rather than a bang. The directors of Fevered Sleep say they are not sure whether their show Dusk, currently playing at the Young Vic, is a film or theatre, but conclude that it’s ‘both and neither, and something other.’ Well I am going out on a limb to call it an immersive film. Most of the show’s length is taken up with a rather beautiful film that shows a faun-like woodland&hellip;

An enjoyable immersive experience for all ages, but adults have more to gain from it than children.

The directors of Fevered Sleep say they are not sure whether their show Dusk, currently playing at the Young Vic, is a film or theatre, but conclude that it’s ‘both and neither, and something other.’ Well I am going out on a limb to call it an immersive film.

Most of the show’s length is taken up with a rather beautiful film that shows a faun-like woodland creature – an ‘It’ – trying to find his way back to the forest and his friends. But before the film begins, we all become Its. This involves wearing one of the tails that appear magically before us, and a green facial smudge (still faintly visible when I went to Parents’ Evening, several hours later.) These are top quality tails! Thickly furred and weighty, with a lazy swing, they have the whole audience giggling and playing. Wearing our new tails, we are ushered through a red door into a glade where thick carpets and criss-cross timbers evoke a mossy forest floor and overhanging branches. The screen shows an idyllic, sunlit forest, where a group of ‘Its’ frolic carelessly.

The film tells the story of an It who steps through the same red door that we used, but in the opposite direction, and finds himself in an unfamiliar world. We never learn his name, but I will call him Wide-Eyed-It. As he navigates this new world, trying to get home, Wide-Eyed-It has his first taste of the sea, the cliffs and the city. He meets new creatures and attempts to communicate with them in ways that are endearing and raise a laugh. Through all his new experiences, Wide-Eyed-It is apprehensive but daring, inquisitive and resourceful. This is a story about exploring, being open to new experiences but always remaining true to your roots.

The link between the world on film, and the forest glade in which we are sitting, is made in many ways. When sunlight streams through the trees on screen, our lighting creates the same effect. When we call out to Wide-Eyed-It, he waits just the right length of time before announcing that he hears us. And the coloured beacon that guides him home appears simultaneously on screen and on stage in front of us. It is atmospheric and magical.

The show is aimed at 5-7 year olds, so there is audience participation, which feels like a bit of an afterthought, including a catchphrase – that is if you count howling. On the other hand there are no poo jokes, no baddies, no pretty dresses, no silly songs, no slapstick, and still it seems to hold the children’s attention for the duration. However, I could not help feeling that the show had more to offer to the adults who made, funded and took children to see it, than it did to the children themselves. There is a yearning for a connection with the natural world, for a simpler and more innocent existence. There is a fascination with the process of discovery and the acquisition of experience. By and large, these are not childish preoccupations. Children of this age learn something new every day – how to reach the tap, how to multiply by six – they take it for granted, and they take it in their stride. Many of them also really like noisy, manmade, mechanical things, as any visitor to the Science Museum can attest.

Dusk is a beautiful and evocative show, with a delightful central performance from Nasi Voutsas and highly effective use of lighting, sound and set. Yet it all feels a bit worthy, especially when the entirely predictable reference to deforestation pops up. It is a show for children, and they seem to enjoy it. But this adult would have liked more fart jokes.

Previous: Beauty of The Beast, The Place – Review
Next: The Realness, Hackney Downs Studios – Review

The Wolves in the Walls, Little Angel Theatre – Review