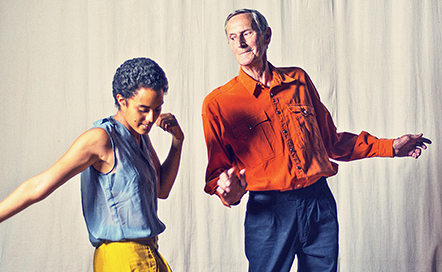 Pros: Three bold and charismatic dads accompanied by some very impressive junior dancers. Cons: Rough around the edges in parts. Some might prefer more polish, particularly in the professional dance sequences. Participation is a hot topic in the arts industry as venues and artists all strive to involve more people, and bring more diversity to the theatre. With Dad Dancing, Rosie Heafford, Helena Webb and Alexandrina Hemsley show how it’s done. First, and perhaps most impressively, they have managed to get their dads to participate. Three men who collectively know about geology, advertising and finance, but not a lot&hellip;

A charming show, full of warmth and humour. Dance is used brilliantly in the service of storytelling.

User Rating: Be the first one !
Participation is a hot topic in the arts industry as venues and artists all strive to involve more people, and bring more diversity to the theatre. With Dad Dancing, Rosie Heafford, Helena Webb and Alexandrina Hemsley show how it’s done. First, and perhaps most impressively, they have managed to get their dads to participate. Three men who collectively know about geology, advertising and finance, but not a lot about contemporary dance, have been persuaded onto the stage to dance and share their stories of fatherhood. Secondly, they are joined by a supporting cast of twenty-two fathers, sons and daughters, of all ages and ethnicities, mostly drawn from community workshops.

For Dad Dancing, the Council Chamber at Battersea Arts Centre was made up to look a bit like a front room, with the cast sitting on shabby sofas and assorted wooden chairs around the edge of the stage. Through a series of sketches, anecdotes and dances we gradually learnt more about all the performers and their family life. The dancers and their dads answered questions about themselves by moving forward the requisite number of paces. Gentle comedy came at the expense of David, the oldest and most conservative-looking of the dads, as he consistently had to walk further than anyone else, thereby revealing a colourful romantic past. In another scene, Andy told the story of Helena’s birth, as the two of them sat side-by-side, acting out the scene with choreographed movements. In some scenes the whole cast came on stage to offer up confessions about family life; some were mundane, some shocking, and others very intimate. Whilst the focus was on the six lead performers, it was clear that every contribution from each participant carried equal weight. And with so many different perspectives on offer, every member of the audience must surely have found some small thing that resonated with their own experience.

If I haven’t talked much about the dance, it’s because in this show dance was a means rather than an end. There was dance – lots, and most of it very lovely – but its purpose was to convey personality and tell stories. While the three dads had obviously been coached somewhat, their choreographer daughters had been careful not to iron out a single wrinkle of personality from the performances; each dad did his own dance, in his own way, and it was clear that they had been involved in the entire creative process. As Rosie explained wryly, the dads were keen for each scene to have a theme, for the theme to be clearly signposted, and for the costumes and music to support the theme; an insight into the discussions that must have gone into making this show, as artistic sensibilities came up against a more commercial or scientific turn of mind.

There were a few elements of Dad Dancing that did not work perfectly. Some of the anecdotes drifted into an unspoken “…you really had to be there…..”, or were family in-jokes that didn’t quite cut it with a wider audience. But perhaps that’s the price of authenticity. There was also something a bit weird about the dancers and dads hugging; it seemed superfluous. There was so much evidence of love and trust between them in the fact of doing the show, in the dancing, and in the storytelling, that a slightly awkward, possibly scripted, hug at the end of a scene just felt contrived. But these are small niggles about a show that generally succeeded on many levels.

In the final scene, participation extended to the audience, who were invited onto the stage for an impromptu disco. Generally it takes an awful lot to get me across that Rubicon between seats and stage, but this was Whitney! And after a show that celebrated dance, openness and community, it was no surprise that every one of us got our groove on.

Previous: Frankenstein: The Metal Opera, The Space Arts Centre – Review
Next: Do We Do the Right Thing?, New Diorama Theatre – Review