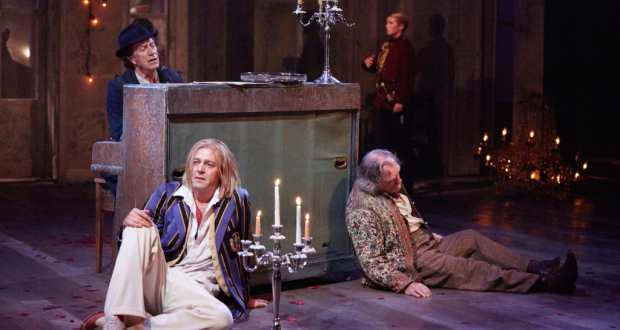 Pros: The cast is excellent and the set design is an experience in itself.

Cons: A more critical look at the play’s outdated values would have been welcome.
Twelfth Night, Watford Palace Theatre – Review

Pros: The cast is excellent and the set design is an experience in itself. Cons: A more critical look at the play’s outdated values would have been welcome. Before I got into reading Shakespeare I only knew Twelfth Night as a) the 17th century version of She’s the Man and b) the play that Shakespeare in Love ends with. Fortunately there’s more to it than that, proven in this marvellous production by English Touring Theatre and Sheffield Theatres. In Twelfth Night Viola finds herself on the coast of Illyria after being shipwrecked in a storm. Believing her twin brother&hellip;

A fresh, funny and fast-paced production that flies by.

Before I got into reading Shakespeare I only knew Twelfth Night as a) the 17th century version of She’s the Man and b) the play that Shakespeare in Love ends with. Fortunately there’s more to it than that, proven in this marvellous production by English Touring Theatre and Sheffield Theatres.

In Twelfth Night Viola finds herself on the coast of Illyria after being shipwrecked in a storm. Believing her twin brother Sebastian, who was also aboard the ship, to be dead, Viola disguises herself as a young man, adopts the name Cesario and starts working for Duke Orsino. Orsino is in love with Countess Olivia, whose father and brother have died recently and who has vowed not to see any admirers for seven years. Orsino, who clearly hasn’t learnt that no means no, sends Viola (as Cesario) to charm Olivia in his stead.

Viola, meanwhile, has fallen in love with the Duke, but attempts to win Olivia over on his behalf anyway. Her charm offensive is a bit too effective though, causing Olivia to promptly fall in love with ‘Cesario’. The show also features a subplot in which Olivia’s drunken uncle Sir Toby and the servants play a cruel prank on the pompous steward Malvolio, tricking him into thinking that Olivia is in love with him.

Twelfth Night has all the elements you’d expect to find in a Shakespearean comedy: cross-dressing, mistaken identities, people falling in love with the wrong people and a happy ending (for most characters that is). Frankly, the farfetched quality of the canonical comedies can be a bit of a trial at times, especially in the hands of a less-than-excellent company. It’s a good thing then that English Touring Theatre and Sheffield Theatres have brought together some of their best and brightest for this production.

Director Jonathan Munby has chosen to underplay the more serious notes while maximising the play’s comedic aspects, which he does with great verve. I found myself laughing at jokes I’ve heard countless times before. Munby keeps things pacey and the almost three-hour show flies by. This is partly due to the fact that there are no big scene changes needed, thanks to Colin Richmond’s low-key yet evocative set design that oozes faded glory.

The cast is magnificent, a true ensemble in which the actors are evenly matched. I would name them all if I could, but in this limited space I’ll restrict myself to mentioning David Fielder’s uproarious Sir Toby, Rebecca Johnson’s Olivia and Rose Reynolds’ Viola: both refreshingly unapologetic, confident women who know who and what they want. Ross Waiton’s captain Antonio expressed a quiet desperation at losing Sebastian that was too palpable to really speak to a happy ending.

If there’s one point of criticism I have for this production it’s that Munby seems to have rather casually taken on board the play’s inherent implication that love between anything other than a man and a woman of equal standing is pretty much doomed. Despite the ‘fuzziness’ of relationships developing between Orsino, Viola/Cesario and Olivia, at the end we’re left with three safe, society-approved heterosexual marriages. Antonio and Malvolio meanwhile are punished for wanting something else: a relationship with a man in the first case, and a relationship with a women of higher standing in the latter. How to deal with issues like this one when producing Shakespeare today is difficult, but here it seems as if Munby has simply decided to ignore the matter entirely.

Despite this, Twelfth Night is a hugely enjoyable and funny show; brilliantly acted, cleverly designed and sleekly directed. Seeing it at the Watford Palace Theatre certainly isn’t a punishment either. The beautiful auditorium can match the grandeur of most West End theatres, but without the inconvenience of having to choose between chopping half your leg off or knocking the person in front of you in the head every time you move. It’s a bit of a trek on the Overground for me personally, but one that’s definitely worth it when at the end of the line I reach such a hospitable theatre, and such a charming show.

Author: William Shakespeare
Director: Jonathan Munby
Producer: English Touring Theatre and Sheffield Theatres
Booking Until: 1 November 2014 at Watford Palace Theatre. After that the production will continue its tour and be in London again between 18 and 22 November 2014 at the Richmond Theatre.
Box Office: 019 2322 5671
Booking Link: http://watfordpalacetheatre.co.uk/page/twelfth-night-2