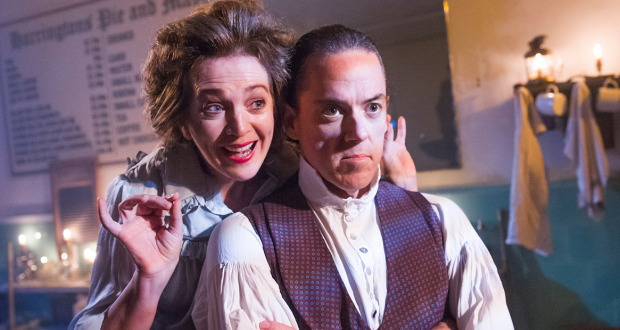 Pros: Performed in an actual pie shop with an extremely talented and eager cast, the audience become so involved that you almost feel guilty for not being able to stop what you know is going to happen.

Cons: The seating is a little cramped but it’s worth it for the atmosphere! Be wary if you don’t like participating in shows.
Sweeney Todd: The Demon Barber of Fleet Street, Harrington’s Pie and Mash Shop – Review

Pros: Performed in an actual pie shop with an extremely talented and eager cast, the audience become so involved that you almost feel guilty for not being able to stop what you know is going to happen. Cons: The seating is a little cramped but it's worth it for the atmosphere! Be wary if you don't like participating in shows. I had high expectations for this production after learning that it was the result of a Kickstarter campaign and I have to say that I was not disappointed. From start to finish Sweeney Todd: The Demon Barber of Fleet&hellip;

Thrilling, original and demonstrating lots of creativity, Sweeney Todd rivals big budget West End shows with the enthusiasm of its cast and the intimacy of immersive theatre.

User Rating: Be the first one !
I had high expectations for this production after learning that it was the result of a Kickstarter campaign and I have to say that I was not disappointed. From start to finish Sweeney Todd: The Demon Barber of Fleet Street is an original, immersive piece of theatre made possible by a talented cast and creative team and I think I speak for everyone in the audience when I say that I would love to see this again.

Pie shop by day and buzzing new theatre venue by night, Harrington’s Pie Shop in Tooting provides the perfect setting for Stephen Sondheim’s sinister musical. Its 100 year history lends it all the authenticity of a Victorian establishment and you can even order a pie for dinner beforehand. Prior to the show’s start we were ushered into the barbershop (see what they did there?) across the street where Tooting Arts Club have set up a cosy little bar that you can visit during the interval too.

Upon entering Harrington’s you take your seat at one of the dining tables and are ominously warned not to leave drinks (or your hands) on them as the cast have a “propensity to jump on the tables”. The lights fade out and when they come back up there’s a cast member sat bursting into song at the end of your table. If you don’t want to be singled out during the play you’ll probably want to avoid the ends of the tables – after the interval everyone scrambled to get back to avoid being on the end and I ended up being immersed in the beggar woman’s shawl for part of the second act.

The eight-strong cast uses the small space fantastically, really embracing the chance to get up close and personal with the audience by jumping (sometimes diving) on to the tables and a few wary members of the audience even had Sweeney Todd singing right into their faces. Other audience members were subject to not-so-subtle hints about their lack of hair during the introduction of Mr Perelli – I think one man even had a little elixir applied to his head!

Whilst sat there I couldn’t help but be swept away by the story thanks to the acting talents of the cast but especially due to the standard of the score. Particularly I fell in love with the voice of Grace Chapman (Johanna), which has just the right touch of bright sweetness without sounding childish or taking away from the harsh reality of the situation. Jeremy Secomb (Sweeney Todd) and Siobhan McCarthy (Mrs Lovett) are also brilliantly poised, with Mrs Lovett’s passionate, often humorous, devotions to Todd set nicely against his straight-faced seething. Secomb looks especially menacing, leaving me unable to shake the feeling that there was something particularly evil beneath his stoic expressions.

The cast is accompanied by a three-piece orchestra, also costumed up, who effortlessly made me forget that they were crammed into the corner of a small pie shop in Tooting. I think special mention should be given to pianist and musical director Benjamin Cox who plays the whole score with enthusiasm and fervour whilst at the same time conducting the rest of the orchestra with one hand!

What director Bill Buckhurst has done well is to balance the right amount of gore with Sondheim’s famed black comedy streak. There is actually very little fake blood involved: Buckhurst instead has chosen to have most of the death scenes played outside of our view, with a red hue and police whistle replacing the usual gore and screams. Yet still I felt myself tense up every time I knew Sweeney Todd was about to take another victim due to the sheer evil relish with which the barber took his victims’ lives.

Hilarious and heart-racing until the end, the cast’s clear excitement for their roles and the production’s eerily realistic setting left me feeling that Sweeney Todd rivals a lot of shows on the West End. Tooting Arts Club’s show is a prime example of how creativity, talent and a passionate team are capable of challenging big blockbuster productions with their small budget and a lot of support. It’s no wonder tickets are completely sold out…I already want to see it again!