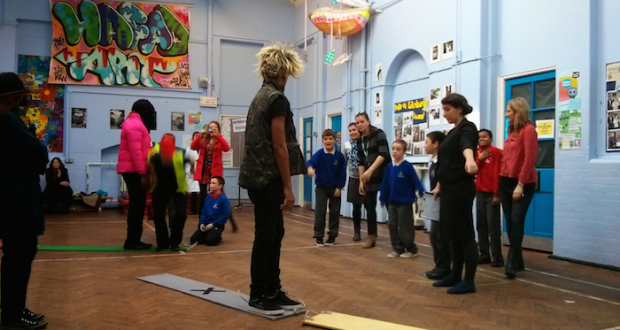 Pros: An inventive show that uses its immersive format to challenge the audience.

Pros: An inventive show that uses its immersive format to challenge the audience. Cons: Despite addressing big ethical questions, it remains a bit tame. Recently I’ve been seeing quite a bit of immersive theatre and if there’s something I’ve found, it’s that a good start sets the tone for the first half of the show. Shunt’s latest offering, The Boy Who Climbed Out of His Face, required you to first take off your shoes and socks and put them in a box you had to carry around. differencEngine’s Heist started with someone instructing the audience not to punch anyone&hellip;

Immersive theatre that is entertaining, demanding and creepy in the best possible way.

Recently I’ve been seeing quite a bit of immersive theatre and if there’s something I’ve found, it’s that a good start sets the tone for the first half of the show. Shunt’s latest offering, The Boy Who Climbed Out of His Face, required you to first take off your shoes and socks and put them in a box you had to carry around. differencEngine’s Heist started with someone instructing the audience not to punch anyone in the face, after which we went into a dive bar and were given ‘criminal’ nicknames (Rosemary Fries here, in case you were wondering). So, you really have to bring something weird or creepy to impress me these days, and SPID Theatre Company did not disappoint. There were consent forms, name badges, CCTV cameras and a very self-conscious couple of minutes spent in what was effectively a broom closet with one of the actors answering questions about ethics. And then it was time for the actual show.

As the cheeky little ‘i’ in the title suggests, iAm is about new technology and how we interact with it. But we’re not talking about a watch you can make phone calls with here: an iAm is basically a robot in a human body that has no other purpose than to make its user happy. The technology is still in its infancy, which is why the company behind it has brought together a focus group for testing. A focus group that naturally, consist of us, the audience members. We were divided into three groups and then given an iAm to try out. What follows is a series of tasks that each group has to accomplish with their iAm to gain points. It’s an ingenious format that allows for plenty of fun after the initial awkwardness of ordering your iAm around has been overcome. But as anyone with some familiarity with sci-fi can predict, the atmosphere does not remain light-hearted throughout, which is all I’m going to say about the rest of the plot.

With this show SPID focuses on some of the ethical questions surrounding our ever-increasing demand for new technologies and our personal responsibilities in using them. While the issues addressed are staples of the science-fiction genre and therefore hardly original, the immersive nature of the show more than makes up for that; wrestling with these problems yourself rather than watching characters on a screen is a much more powerful and affecting experience. Still, I felt that the show could’ve been more effective. At its best iAm feels like an elaborate psychological experiment that’s about testing the participants rather than the robots. It’s the uncomfortableness of those moments that’s the most hard-hitting, but it seems like creators Mel Cook and Helena Thompson were afraid of pushing too far. As a result, even at its darkest the show never truly tests our boundaries and remains somewhat tame.

iAm is performed by a cast of six, three employees conducting the focus group and the three iAms. Scott Brooksbank is appropriately unsettling as the doctor leading the experiment, but I was especially impressed by Nicholas Ako, Louis Chandler-Joseph and Matthew Schmolle as the robots. Keeping a straight face throughout the entire show can’t be easy, especially when you look at the rather ridiculous things they had to do. In terms of set there’s not much to talk about; sometimes simply using your building as it is proves most effective, which is certainly the case here.

All in all, iAm is both entertaining and challenging due to its cleverly devised format. SPID has found a fresh way to address familiar issues that, in my opinion, has the potential of pushing the boundaries of immersive theatre. I really hope they’ll continue experimenting and look forward to being creeped out by them even more in the future.