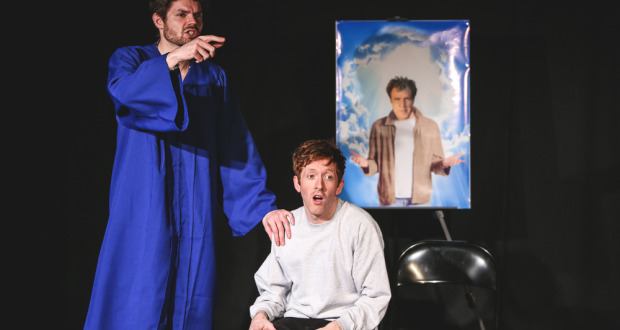 Pros: Hilarious, outrageous, multi-layered. Cons: Central notion is confused and outdated. On walking into Soho Theatre’s upstairs auditorium all attendees are given blue and pink shower caps depending on their gender. It is a misplaced device in a play that has several, never quite sure of its message. But it is so much fun that it doesn’t really matter. Going Straight tells the story of Gabe, a charismatic misogynist, and his attempts to turn his gay friend, Rob, straight. Both actors play their parts exceedingly well and enjoy playing off the remarkably boisterous audience. Gabriel Bisset-Smith’s Gabe is equal&hellip;

Despite the need for a tightening of its focus it’s able to touch on a lot of worthwhile topics and has a lot of fun while doing it.

On walking into Soho Theatre’s upstairs auditorium all attendees are given blue and pink shower caps depending on their gender. It is a misplaced device in a play that has several, never quite sure of its message. But it is so much fun that it doesn’t really matter.

Going Straight tells the story of Gabe, a charismatic misogynist, and his attempts to turn his gay friend, Rob, straight. Both actors play their parts exceedingly well and enjoy playing off the remarkably boisterous audience. Gabriel Bisset-Smith’s Gabe is equal parts detestable and likeable. Robert Cawser does an excellent job playing the nervous, self-doubting and unfunny Rob, coerced into the ‘Church of Clarkstianity’ which worships Jeremy Clarkson and contains a six-step method that could turn Graham Norton into Roy Keane.

The piece is slickly put together, fast and frantic, with quick scene and costume changes as well as frequent transitions between imagination and reality, past and present. These sections often contain wonderfully choreographed routines that use pre-recorded sounds to match the play’s goings-on. Although the theatre space is fairly ordinary, cutaways and flashbacks are inventively achieved and expertly take you to the desired place and time. The actors’ use of the audience is excellent and is where much of the play’s biggest triumphs are found, not least when the audience is made to act as the central piece in a five-man orgy!

The piece dramatically improves as it progresses. While the start is stereotype-ridden and unfocused, the piece finds its heart and has fun with it. It is essentially about being true to oneself rather than grappling with the confusing, false rules about what it means to be a man. It confronts such issues as metrosexuality, father-son relationships and the broad spectrum of manhood, achieved through a wild, exaggerated parody of a straight man that never offends – a lesson in itself.

However placing Jeremy Clarkson, a womanising car enthusiast, as Gabe’s role model, means that homosexuality being the central theme is erroneous. Clarkson has nothing to do with the issue; he is simply associated with generic manhood. As can so often happen in a one-hour piece, the scope is simply too broad and Gabe becomes an individual that would require proper exploration over a 10-part TV series. A gay, gay-hating, Clarkson-loving, beer-drinking, misogynistic idiot are too many character traits for one short piece to adequately tackle and turning them all up to 11 means that Gabe is too much of a mess to properly engage with. A decision is needed between the amount of stereotypes and their amplitude; not to make Gabe a believable character, as that’s clearly not the point, but to at least ground him in some kind of truth in today’s society. Stereotypes are funniest, not least more intelligent, when they’re close to the bone.

The means just don’t quite justify the end: the play is hyperbolic in its methods, so why not finish on a message that is equally exaggerated, rather than one that we all now take for granted. For example, Gabe describes Jesus as gay, something which many would find disgusting and unthinkable. But we more fully appreciate sexuality and treat this joke like any other. Gags with such bravery are rare; though overall the jokes are plentiful and good. Many commentators refer to today’s culture as ‘post-gay’, which the play is too archaic to properly sit within. It’s an excellent piece that’s fun and imaginative, and it does a good job exposing the flaws that prevailed in our society not so long ago, it just needs a bit of an update.

Previous: Waiting For Godot, The Cockpit Theatre – Review
Next: Best of Be Festival, The Barbican – Review

Kim's taste in music and film are eclectic to put it nicely, and weird to put it not nicely. His tastes in theatre however are much more traditional - a murder mystery with a few good twists, a musical with a few good songs or a comedy with stupid characters saying stupid things will all do it. Away from the theatre Kim enjoys good public policy, living in Hackney and drinking milk.