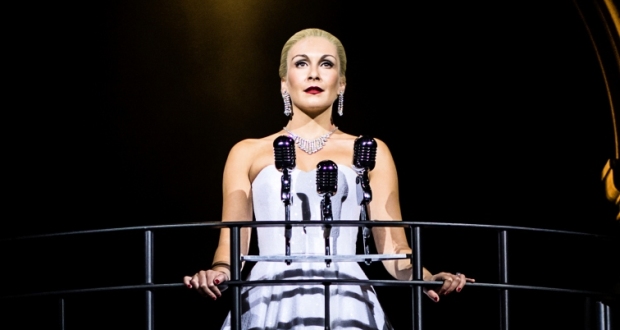 Pros: A strong cast with stellar vocals hit all the right notes of one of Lloyd Weber’s greatest scores

Pros: A strong cast with stellar vocals hit all the right notes of one of Lloyd Weber’s greatest scores Cons: Sound felt warbled in parts and production needs updating As a gay man growing up in the 90s, I will always remember 1996 as one of my favourite years. Then pop icon Madonna, and the woman I had idolised my whole life, was performing the lead role in the big screen version of Evita. The hype was off the charts; the critics were preparing to pan; the gay community braced itself. Needless to say it was a massive award winning success&hellip;

A stunning revival of one of the greatest musicals of our time spearheaded by the gorgeous Madalena Alberto.

As a gay man growing up in the 90s, I will always remember 1996 as one of my favourite years. Then pop icon Madonna, and the woman I had idolised my whole life, was performing the lead role in the big screen version of Evita. The hype was off the charts; the critics were preparing to pan; the gay community braced itself. Needless to say it was a massive award winning success and the film brought this incredible Andrew Lloyd Webber and Tim Rice collaboration to a whole new audience. Fast forward almost 20 years and Evita is still one of my favourites, Madonna not so much.

Evita, first performed by Elaine Page in 1978, explores the life of political phenomenon Eva Peron through flashbacks and the impact she single handedly made on the people of Argentina. It’s no mean feat and this new West End production, currently enjoying a limited run at the stunningly refurbished Dominion Theatre, is superb.

Madalena Alberto as the most beloved and hated woman in Argentina, is stupendous. With over 30 costume changes, umpteen wig changes, strong characterisation throughout and a voice like velvet, she stole the show for me. The word wow just doesn’t even cover it. Originally from Portugal, Miss Alberto hits all of those demanding Lloyd Webber notes with ease and tremendous focus. Her ‘Don’t Cry For Me Argentina’ had the audience gripped with our goosebumps on high alert. Her incredibly raw performance of ‘You Must Love Me’ had me in tears as I found this scene, between a dying Evita and her husband, beautifully intimate and truly sung from the heart. Alberto is most certainly one to watch.

Wet, Wet, Wet legend Marti Pellow, who performed the pivotal role of the show’s narrator Che, gave a solid performance. He really came into his own in act two, with his stellar vocals on ‘And The Money Kept Rolling In’ being a personal highlight for me. In parts, I found some of his movements a bit too staged and robotic but his voice was undeniably good and he owned the stage. Another highlight had to be Ben Foster’s superb rendition of ‘Night Of A Thousand Stars’. This reality TV star has a good set of lungs on him and is spectacular.  Sarah McNicholas as Peron’s mistress performs a heartbreakingly beautiful version of ‘Another Suitcase In Another Hall’ and her solo is mesmerising. Matthew Cammelle as Peron is excellent as was the entire support cast.

This musical is peppered with so many memorable songs and this is quite clearly one of Lloyd Webber’s greatest scores. The Latin rhythms all mixed in with hard rock and beautiful melodies, are just pure genius. As a rock opera, Evita can feel quite loaded in parts and the sound did need some fine tuning as it was all over the place. Additionally, the set was too dated for my taste as I found myself saying ‘Pillars up, same pillars down’ quite a lot.  In saying that however, the direction by Bob Tomson and Bill Kenwright is stunning and there are some beautifully styled scenes. ‘Rainbow High’ with all of the mirrors is magical and exactly how you’d imagine Eva Peron say “Christian Dior me!”.

Evita is a musical that will resonate with audiences for years to come.  The incredible story is true, the music is sublime and the feeling you have when you walk out of the theatre humming every single melody is remarkable.