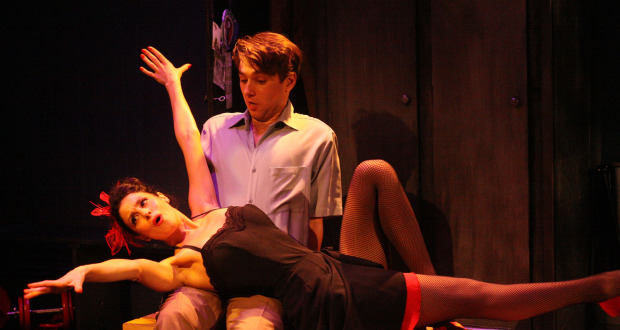 Pros: Brilliantly constructed songs, seamless choreography and an excellent cast that didn’t put a foot wrong. Cons: Very few worth noting. However, a 20 strong cast struggled to find space in a very tight performance area. As with all other pub theatres, I wondered exactly how the Landor would be able to stage a production like Damn Yankees. That’s not to say pub venues aren’t capable of putting on a good show; it’s just the upstairs, yet again, felt like somebody’s living room. A painfully stripped down three piece band squeezed into the tiniest of corners, but they provided&hellip;

As with all other pub theatres, I wondered exactly how the Landor would be able to stage a production like Damn Yankees. That’s not to say pub venues aren’t capable of putting on a good show; it’s just the upstairs, yet again, felt like somebody’s living room. A painfully stripped down three piece band squeezed into the tiniest of corners, but they provided magnificent support to a cast that really wanted to entertain.

The story itself is a reworking of the Faust legend. Real estate agent Joe Boyd is a long-suffering fan of the Washington Senators baseball team; his wife Meg is driven to distraction by his obsession. After another defeat Joe yearns for a long ball hitter so they can beat those Damn Yankees. He would gladly sell his soul for a long ball hitter. Sure enough Mr Applegate appears. Although he looks like a salesman he is really the devil and offers Joe the choice he dreams of: if he gives up his soul then he will become Joe Hardy, the big hitter the Senators need. Joe accepts even though he must leave his wife Meg. However, his business sense makes him insist on an escape clause. The Senators’ last game is on 25 September, and if he plays in that final game he is in for the duration. If not, he has until 9 o’clock the night before the final game to walk away from the deal and return to his normal life.

The songs burst with energy and a coolness that’s difficult to describe. There are numerous standouts that skilfully tell the story: Six Months Out Of Every Year is Meg’s lament to a husband whom she loses during the baseball season – perhaps something to which the ladies in our lives can relate by substituting baseball for football, cricket or rugby! Heart is the show’s biggest footstomper, led by coach Van Buren’s plea for his team to show some heart. Shoeless Joe from Hannibal, MO is another barnstorming song detailing the press fascination with Joe Hardy’s background. Whatever Lola Wants Lola Gets is slyly instigated by Mr Applegate to keep Joe in line.

Thankfully, baseball jargon is kept to a minimum and the often-used Faustian theme doesn’t seem jaded or predictable. The cast members are excellent performers and cope with costume changes that would have made Diana Ross go dizzy. Remarkably, all members of the company get their individual spots in the show, which is no mean feat for a large ensemble cast. Even so, certain characters within the story compel a name check for actors filling the role: Jonathan D Ellis virtually steals the show as Mr Applegate, playing the role with complete relish; Poppy Tierney is convincingly seductive as Lola; Gary Bland as Joe Boyd has an angelic purity in his voice, and Alex Lodge as Joe Hardy gets the all-American boy image off to a tee.

It seems pedantic to criticise a show that goes for entertainment from the get-go. However, I must return to my hobby-horse regarding pub venues generally. I always see it more as an observation than a criticism, but musicals just scream to break free from such a restrictive format. Plays are a natural home for pub theatre but musicals just need more space. During one of the musical numbers, performers were continually moving a bench backwards and forwards, just to make room for the next phase of the routine. Whilst it’s true the audience are up close to the action and benefit from competitive ticket pricing, it does lose something in a small venue. Having said that, venue, cast and creatives deserve a massive high five for staging a brilliantly entertaining show.