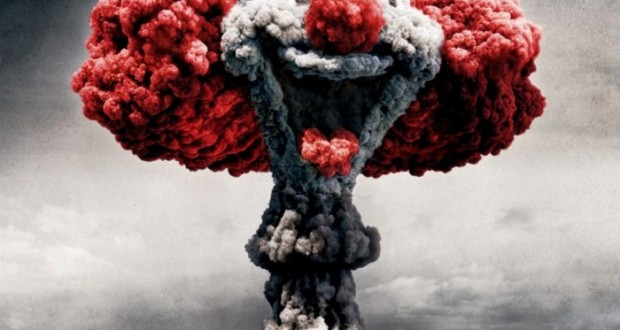 Pros: Extreme energy and commitment from the performers.

Pros: Extreme energy and commitment from the performers. Cons: Very long, very slow, very dark, very didactic. The Chelsea Theatre has a large black-box theatre and a small cabaret venue.  This seems like it would work really well for Comedians, which involves putting on a comedy set between two acts that take place in a classroom setting. Instead, the move between the two spaces and the intervals that it takes to get everyone settled has the effect of dragging the show out to a staggering three hours. Three hours focused on the difference between ‘art’ and ‘entertainment’; between getting&hellip;

Brutal, almost dehumanising production that raises more questions about comedy than it is able to answer.

The Chelsea Theatre has a large black-box theatre and a small cabaret venue.  This seems like it would work really well for Comedians, which involves putting on a comedy set between two acts that take place in a classroom setting. Instead, the move between the two spaces and the intervals that it takes to get everyone settled has the effect of dragging the show out to a staggering three hours. Three hours focused on the difference between ‘art’ and ‘entertainment’; between getting to do what you love and doing what you need to in order to get rich.  Those are big questions and they deserve a big canvas, but it doesn’t need to be this big.

A comedy class is meeting for the final time in the rented evening classroom that they use every week, getting ready for their debut. A talent scout will be there. Their futures, they feel, hang on the outcome of this night. It’s a pity, then, that the advice of the talent scout contradicts every lesson their own teacher has tried to instil in them until now. Caught in a dilemma of whether to remain true to the ethos they’ve been taught thus far or whether to grasp for fame at any cost, interpersonal tensions bubble to the surface.

Simon Balcon deserves all due credit for maintaining the almost feral energy of his character Gethin Price throughout three hours of intense, aggressive performing. He gives the impression of being always on the edge of an act of violence, to the point where it’s difficult to watch. I can’t describe his performance as enjoyable (unless you enjoy watching people shout obscenities on the tube; it’s the same sort of raw energy that makes you want to escape rather than engage) but his raw power of expression and commitment to the energy level required is laudable.

The remainder of the comedians (Adam Bone, Gary Colman, Oliver Hewett, Craig J Simons, and John Pickard) also deserve accolades for their unwavering dedication to performing characters that are frequently unsympathetic. Of particular note is their deliberately terrible comedy set. It takes a lot of nerve to get up and perform something that you are intending to be ill received.

The comedians are shown to fail when they try to compromise their principles, and the actors do this admirably, but it is not enjoyable to watch.  Stephen Christos as Eddie Waters, the gentlemanly, philosophical comedy teacher has some fantastic interactions with Dennis Paschal, playing Waters’s old rival in comedy and current talent scout Bert Challenor. Naveed Shahzad’s performance as Mr Patel, a lost immigrant who accidentally wanders in while searching for a language class adds subtle humour and depth to what is often an unrelentingly hit-you-over-the-head-with-the-message style throughout the play.

The design team – Chiara Pecchioli and Bonnie Adair – gave a genuine 1970s feel to the Chelsea Theatre space and to the actors. From the stark wooden desks to the bad alterations in Patel’s suit, it really did feel as though we were transported back in time. Unfortunately the wooden desks are very noisy while being moved around the stage and this definitely interferes with the acoustics and overwhelms the dialogue. But they look cool.

Despite several excellent production elements, like the remarkable design and the dedicated performances, this shouty and doctrinal expression of existential desperation arising from fear about our own moral compasses is not a way that I would recommend spending three hours. This is a shame, because the ingredients of greatness are there, but they’re overshadowed by the drawbacks.