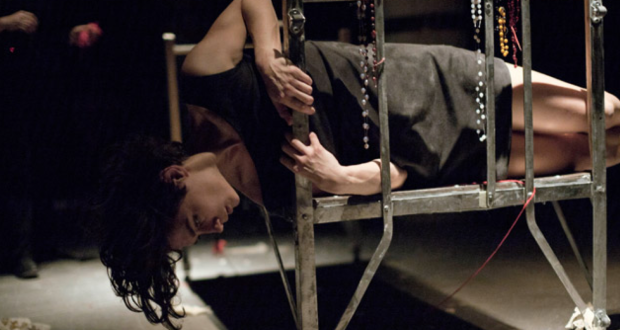 Pros: Stunning music and an impressive set.  Cons: A slightly disappointing ending, with the show’s intensity fizzling away.  Last Friday, I joined a small crowd of people at the Battersea Arts Centre listening to a short talk about Armine, Sister before the performance began. We were told that Armine, Sister is about the genocide of millions of Armenians in Anatolia at the start of the 20th century. During the genocide, thousands of churches were destroyed and a unique tradition of Armenian liturgical singing almost disappeared. The production takes this musical tradition as a starting point and constructs the show&hellip;

Last Friday, I joined a small crowd of people at the Battersea Arts Centre listening to a short talk about Armine, Sister before the performance began. We were told that Armine, Sister is about the genocide of millions of Armenians in Anatolia at the start of the 20th century. During the genocide, thousands of churches were destroyed and a unique tradition of Armenian liturgical singing almost disappeared. The production takes this musical tradition as a starting point and constructs the show around it.

Indeed, the music is the heart of the show. It is beautiful, atmospheric and unearthly. Sometimes, a low voice chants alone in the darkness. At other times the whole cast sing together, the sound swelling and rising to fill the small theatre like a wail of despair. At the same time, the actors go through stylised motions of suffering, torture, and death. Again and again we are shown moments of violence, aggression, pain. Often the same action is repeated over and over, creating the sense that we are seeing many people, many lives. We are shown the pain and suffering of a whole people, the destruction of a way of life. It is intense and effective, atmospheric and mesmeric.

For me, the most impressive aspect of the production was the set. To begin with, the stage is populated by thick, towering columns suggestive of a church. Throughout the show, these are moved and deconstructed. Some are violently torn apart. Some are felled like trees. Some are chipped open to let out streams of sand that pour slowly out on to the set with a chilling, eerie sound like distant rain. Towards the end, the stunted remains of parts of the columns look more like a graveyard than a church. But what I found most impressive about the set was the way it involves and intimidates us as an audience. The first time the performers moved one of the columns, it genuinely scared me. I thought it would fall on the audience. What had at first looked solid and supportive was revealed to be loose, potentially unstable, a towering, untrustworthy mass looming over us. Columns were carefully lowered to the ground, huge beams moving and hanging above the stage, threatening both actors and audience, subtly drawing us in to feel some part of the fear depicted on the stage.

Despite the beautiful singing and brilliantly-used set design, I was left disappointed by show’s ending. For me, the last ten minutes lacked the sharp intensity and atmosphere of the rest of Armine, Sister. The music that held everything together – giving shape to the disparate elements and actions – simply stopped. Characters began to leave the stage. The columns had been cleared away and the lights had brightened. I suddenly became aware of the audience members sitting on the opposite side of the stage; previously unseen, now a distraction. Eventually, one performer lay crumpled and unmoving on the stage. The audience sat hesitantly, unsure if the show was over – an awkward and anticlimactic end to an intense, dramatic production.

If I could choose one word for the production, it would be ‘uncomfortable.’ And yet, that’s not necessarily a bad thing. It is not meant to be enjoyable. It’s a show about murder, pain, destruction. It’s meant to be thought­-provoking and educational. Overall, the show was harsh, aggressive and intense. It made me long to see some tenderness between the actors, some comfort offered. But on the whole, the performers moved in separate spheres – as if each travelling through their own individual landscape of suffering, alone and unhelped. I found it hard to stomach that we were offered no hope at the end. The church had gone, the singing stopped, all that remains was an unmoving body. No glimpse of a future was offered.

Previous: Win tickets to Hope! – Closed
Next: The Taming of the Shrew, Jack Studio Theatre – Review