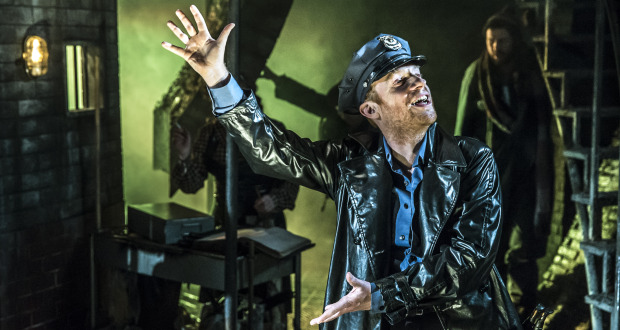 This week we’re giving away tickets to a show that we previously described as ‘unmissable’! Enter now.

This week we’re delighted to be able to offer you the chance to win two top price tickets to the utterly brilliant musical Urinetown, which is opening soon in the West End’s Apollo Theatre! We reviewed this back in March 2014 when it debuted at the St James Theatre, and we gave it ★★★★★, describing it as ‘a unique neo-noir libretto that shocks and excites the senses’. Sounds amazing, right?!

The tickets are valid for any Monday to Thursday performance from 29 September – 27 November 2014, subject to availability. Naturally, you can’t transfer or exchange the tickets, and we won’t be offering a cash alternative!

As always with our competitions, there are no catches – you simply complete the entry form below by 6.00pm on 19 September  2014 and you’ll be entered into our prize draw. If you’re the lucky winner you’ll hear from us a few days later. It really is that simple!

‘laugh out loud funny’
The Guardian

‘This show’s got bags of swing, wit and sheer panache’
Mail on Sunday

The ripples of revolution are now reaching the shores of the West End!

Urinetown, the satirical musical comedy that was a sold out splash hit at the St James Theatre arrives in London’s West End at the beautiful Apollo Theatre with performances from 29 September 2014.

Award-winner, Jamie Lloyd (Richard III, The Commitments) directs this sharp-witted rampant riot of a show that tells the tale of a town fit to burst; where the privilege to pee has become a punishable offence.

Make sure you catch this truly hilarious and critically acclaimed audience favourite when you’re in town.

Sometimes all you need is a drop of a hope to change the world.