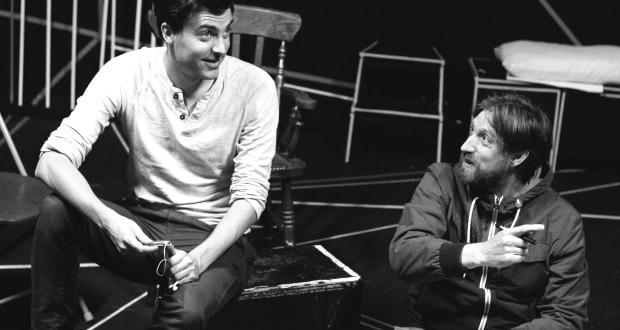 Pros: Powerful performances; writing sparkles in parts. Cons: Definitely dragged in the second half. Some story elements seem superfluous. A new play supported with funding from IdeasTap and Arts Council England, The Love and Devotion of Ridley Smith tells the story of a young stockbroker confronting the moral quandaries of his profession. Tom Machell plays the winsome, naive Ridley as an overgrown schoolboy who realises that he's in over his head but has no idea how to get out because he's never known anything but money and power. A chance meeting with Freddy who claims to be an artist and is clearly&hellip;

An uneven production with both excellent elements and decidedly clunky bits.

User Rating: 2.81 ( 5 votes)
A new play supported with funding from IdeasTap and Arts Council England, The Love and Devotion of Ridley Smith tells the story of a young stockbroker confronting the moral quandaries of his profession. Tom Machell plays the winsome, naive Ridley as an overgrown schoolboy who realises that he’s in over his head but has no idea how to get out because he’s never known anything but money and power. A chance meeting with Freddy who claims to be an artist and is clearly more than he seems prompts Ridley to impetuously quit his job and become an artist too.

Actor Stewart Lockwood makes Freddy into a fascinating creature: he has a comic genius for disrupting the expectations of a scene, often with a pointed understatement that is as captivating as Machell’s boyish charm. There are a couple of fantastic encounters between Lockwood and Terry Diab, playing Ridley’s power-suited, heavy-drinking, iPad-wielding boss Janet Sullivan. The contrast between their two characters is witty, genuine, and funny. Machell too has some notably hilarious moments, though he veers slightly towards a caricature of a rich young lad in contrast to Lockwood’s more natural performance.

Miran Hadzic’s writing has a wonderfully unexpected quality: early in the play Freddy tells a story about a dog that takes a suddenly violent turn, which is jarring but suits the emotional needs of the scene perfectly. The moral arc of the play too has greater depth and complexity than might be expected from a story about a naive stockbroker. Ridley may escape the Big Bad Bank, but it’s not at all clear that he made the right choice by doing so.

Having said that, there are long stretches particularly in the second half that don’t seem to contribute directly to the plot or to add very much to character development. Once Ridley leaves the bank he seems lost and increasingly unhinged, but this doesn’t come to any notable resolution. Once we see him feeling uncomfortable without the anchor of his suit and his easy money, we don’t really learn much more about him. He feels vulnerable and confused, and continues to do so for quite a long time regardless of what else is happening around him. The final character, Sylvie appears to exist only as a vehicle to cause conflict between Ridley and Freddy. The nature of Ridley and Freddy’s relationship is such that tension could (and does) easily emerge more naturally between them. This doesn’t give Lottie Vallis as Sylvie a great deal to work with, leaving her character feeling stilted and flat.

The design team deserves a nod for creating distinctive settings without cluttering or overbearing. The lighting and sound work really harmoniously with the scenery to create the illusion of space and changing atmospheres in the tiny Old Red Lion.

This one is hard to rate because it really is a mixed bag: there are some definite high points in this show but there is a lot of aimless meandering to sit through in order to find them.