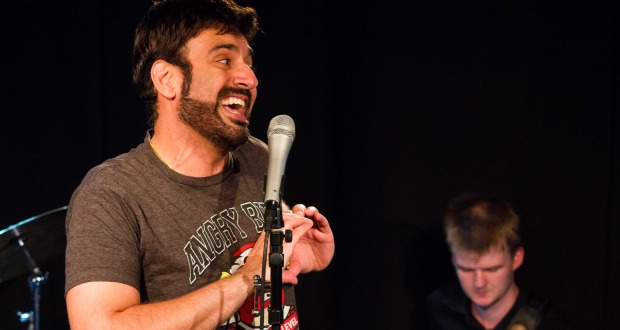 The Greene Card, The Space – Review

Pros: The witty, fast-paced dialogue coupled with a great soundtrack will leave you chuckling.

Cons: The over-the-top-brand of humour might prove a little grating for some, but this is balanced with fantastic storytelling.
The Greene Card, The Space – Review

Pros: The witty, fast-paced dialogue coupled with a great soundtrack will leave you chuckling. Cons: The over-the-top-brand of humour might prove a little grating for some, but this is balanced with fantastic storytelling. I can't explain why, but I've always harboured an inherent dislike of one man shows. Perhaps it's the fear that the humour of one person isn’t likely to appeal to a whole audience of people… as a result, The Greene Card was my first taste of this branch of comedy. Upon arriving at The Space, I ignored the hustle and bustle of the cosy bar next&hellip;

A heart-warming, engrossing show from a strong new addition to London's theatre scene.

I can’t explain why, but I’ve always harboured an inherent dislike of one man shows. Perhaps it’s the fear that the humour of one person isn’t likely to appeal to a whole audience of people… as a result, The Greene Card was my first taste of this branch of comedy.

Upon arriving at The Space, I ignored the hustle and bustle of the cosy bar next door to enter the atmospherically hazy and dimly lit surroundings of the small performance space. After collecting my ticket from a very friendly member of staff, I took my seat at one of the candle-lit tables that sat before the stage.

The audience were enthusiastic from the start, welcoming Sevan K. Greene, and his backing band onto the stage with a warm round of applause. The Greene Card (subtitled: The Unbelievable, Yet Completely True, Story of a Brown Boy in a White World) is a comical cabaret about Greene’s life up until the present, with a focus on his constant struggle to understand his dual identity. The common theme throughout the show is Greene’s constant strive to be accepted as an “average normal white American” rather than submitting to society’s shallow stereotyping of him by his looks and foreign origins.

From the moment the performance started, I was simultaneously delighted and horror-struck. This man was opening with a cleverly adapted version of Disney’s The Little Mermaid‘s Part of Your World, yet in general he was being very over-the-top in an “everyone look at me” kind of way, persuading me that I had been correct in my prejudice of one man shows. However, as I settled into the show, Greene came to demonstrate that underneath this very outgoing persona was a very touching story with universal appeal.

It became hard to draw my eyes away as I listened to this man describe his diet of American TV and music – a particularly moving memory involved him packing all his music into a box and bringing this as one of the few items he could take with him when evacuating from war-stricken Kuwait. Later in the evening, he told of how as a result of racial bullying (and his exposure to American culture) he enthusiastically pursued American citizenship, only to be checked at the last minute by his grandmother’s death.

With a fast-paced, witty monologue peppered with a diverse soundtrack that quickly moves between pop, gospel, musicals and more, The Greene Card is a show preoccupied with how we define ourselves. Greene admitted that after being typecast as a “brown actor” so many times on Broadway, he began to work his incredible history into his CVs. He then realised that this story was something that had merely happened to him, whilst the act of storytelling itself was a part of his identity, influencing his decision to become a writer.

The only thing that would have made the evening better for me would have been if the three other minor cast members were there as backing singers only. This is by no means any criticism of their acting skills – which were hilarious – but rather a concern that the spell I was under when Greene was narrating was broken in the scenes where other actors were present. I would almost describe it as a feeling that they were intruding upon a private conversation.

The performance ended to a full house of applause from an enamoured audience. The Greene Card is likely to cast a spell over anyone lucky enough to see it. Featuring a great, cleverly adapted soundtrack (and quite a few nods to the openness of Londoners) you’ll leave this show with a smile on your face and a warm fuzzy feeling inside.