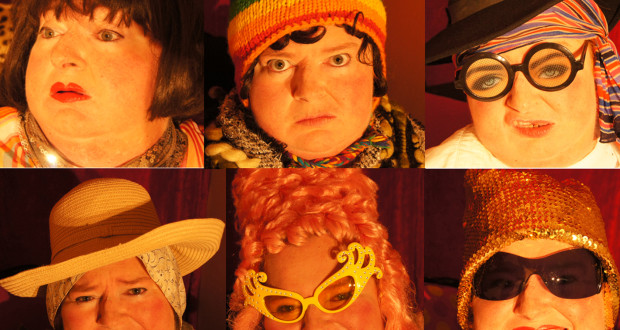 Pros: Playful and irreverent humour in a fresh format.

Pros: Playful and irreverent humour in a fresh format. Cons: The frenetic pace loses momentum at times, making the carefully controlled chaos just look like chaos. My experience of Katherine Araniello's The Dinner Party Revisited, part of the Southbank Centre's Unlimited Festival, is completely coloured by the fact that I get seated next to a Very Important Artist. The moment she finds out I am there to review the show, she very charmingly but very insistently leans into my lap and begins taking notes on my behalf in my programme, a practice she keeps up throughout the performance. Whether by&hellip;

My experience of Katherine Araniello’s The Dinner Party Revisited, part of the Southbank Centre’s Unlimited Festival, is completely coloured by the fact that I get seated next to a Very Important Artist. The moment she finds out I am there to review the show, she very charmingly but very insistently leans into my lap and begins taking notes on my behalf in my programme, a practice she keeps up throughout the performance. Whether by design or serendipity, this bizarre encounter fits seamlessly into Araniello’s irreverent staging of the discomforts of social expectations.

There is a particular focus in the performance on the unconscious aggression of well-meaning gestures. Araniello’s work draws specifically from her experiences about the expectations foisted upon her as a disabled person. I believe that everyone can relate to the emotional experience of negotiating other people’s good intentions though obviously the peculiarities of what those are may differ.

The Dinner Party Revisited is a re-imagining of a 1920s comedy sketch and eventual short film called Dinner for One which depicts a dotty elderly woman hosting a birthday party for herself complete with a series of unusual characters who aren’t actually there, because she’s outlived them all. Araniello’s six dinner guests are performed for us on enormous TV screens, each a more outrageous stereotype of the Tragically Well-Intentioned than the last. These include such guests from hell as Mandy Capp, the world’s most famous Paralympian who is so overwrought about a recent broken nail that she can only resort to Dignitas; Pity Petal, who is just SO SAD about everything; and Charity Ball, who will happily raise money for Good Causes but who will never go on a sponsored skydive herself, dahling. They are all, played by Araniello, who must be having great fun merrily hosting (and roasting) her ghoulish creations. The guests are pre-recorded but Araniello as host is performing live, giving a disconcerting spontaneity to the performance.

Also present onstage are Araniello’s PA, the butler, and the Sign language interpreter. While nominally there to serve Araniello’s needs, their own desires and egos begin to assert themselves throughout the performance. The PA begins to drink from Araniello’s glass, pretending with a straight face that it is her own. The butler gets annoyed with the interpreter when the latter tries to serve some of the food instead of doing her own job. The interpreter starts filching glasses of champagne. And so forth, basically chaos reigns.

Being as loosely framed as it is, the performance has periods of inactivity which give an impression that nobody onstage is sure what they’re supposed to be doing. There isn’t a narrative but there is definitely a structure to the performance and tightening up those slack moments might give a greater sense of momentum. Either that or the slow parts are actually subtle commentaries on an important theme that I can’t quite decipher from the notes so helpfully left for me.

Throughout the performance rather questionable subtitles are projected on an enormous screen in what I think is a deliberately sarky reference to the ineffectiveness of structures nominally designed to support Access. At one point the screen displays a live stream to another theatre in which the performance is being replicated. Though an intriguing idea referring to our current digital age, I didn’t feel this added much to the performance.

Ending with a fantastically silly moment involving a jelly and some dancing, the whole thing is wonderful in its absurdity. It’s an excellent chance to give Pity the finger (the fish finger, naturally. It is a dinner party, after all.) While not afraid to plumb the darker depths of social expectations, there is also a charming warmth in this performance.

This performance has now finished its run.