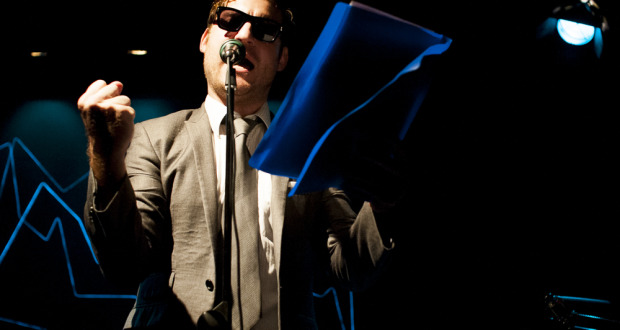 Cons: The only draw back would be to miss this show!
Spank House, Jack Studio Theatre – Review

Pros: Flawless script and impeccable acting – Spank House exposes with glitz and dark humour the seedy truth of the ‘boiler room’ scams. Cons: The only draw back would be to miss this show! It wasn’t all that long ago when the headlines where dripping with the ‘boiler room’ scams.  Crafty ex-pats living in Spain worked to con the rich into fake investments that bled their fortunes. Spank House dives right into this recent history and is easily one of the best crime-thrillers this season. Jake Costello both wrote and performed this dynamic monologue. His performance and character development&hellip;

A triumph! Jake Costello’s performance is incomparable. Arguably one of the best shows in south London!

It wasn’t all that long ago when the headlines where dripping with the ‘boiler room’ scams.  Crafty ex-pats living in Spain worked to con the rich into fake investments that bled their fortunes. Spank House dives right into this recent history and is easily one of the best crime-thrillers this season.

Jake Costello both wrote and performed this dynamic monologue. His performance and character development were top-notch. He was able to flawlessly transition between one character to another, which included switching accents in a snap.  Big kudos for his American – it was spot on! Even his transitions between his phone ‘character’ to his ‘real persona’ were spectacular. This show was full of dark humour that was just delicious.

Sliding onto stage with gusto, Jake grabbed the lone microphone and sweet talked his customers on the other line. He used actual scripts that ‘spankers’ used to swindle people’s money. Hearing it reminded me of the days when I used to work in a call centre – the slimy saccharine words were so accurate, although Jake’s scripts were far more devious than any I ever heard. In true Shakespearean fashion, Jake’s asides revealed the truth behind the scripted lies.

Guiding the audience as if he were making a sale, he told us his story – which was true . . . mostly. From an early age, the character Jake was drawn to subterfuge. Tricking his primary school teacher was only the beginning. He even learned how to wrestle like the WWF fighters on the TV, although he was disillusioned by the ‘realness’ of actual wrestling; it lacked the glamour and pizzazz that he saw on the telly.

After graduating with a degree in theatre, he moved to Barcelona to teach English.  And that is where he got drawn into the fast-paced, drugged-up world of conning the rich out of their wealth.  Life was good until the economic crash.

Jack’s physicality and use of the stage space was excellent.  He was never stagnate or boring to watch.  Just the opposite – his performance was riveting! The stage itself was brilliantly conceived.  It felt like being in the office with the desk, laptop, and chair.  There was also a couch and coffee table with Connect Four, which comes into play later in the performance.  Beer cans and newspapers were scattered about, evoking the madness of the boom years and the eventual crash.  However the most effective feature was the neon blue lighting on the back wall.  These were arranged in series of zigzags that looked much like economic graphs, with peaks and valleys.  This motif was repeated on the floor as well.  There was also great technical use of video and stills that added a dynamic pace to the show.

This show is not to be missed. It’s playing until 13 September at the Jack Studio Theatre, but you better hurry – tickets sell out fast!