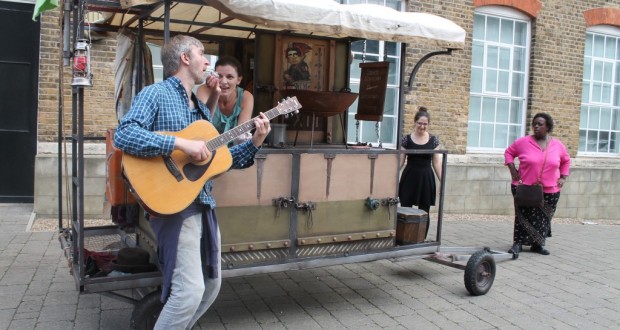 Mother Courage and Her Children, The Royal Arsenal – Review

Cons: Lots of walking and standing on cobblestones. Also a little difficult to see because the audience is on the same level as the performers.
Mother Courage and Her Children, The Royal Arsenal – Review

Pros: Good performances in a striking riverside setting. Cons: Lots of walking and standing on cobblestones. Also a little difficult to see because the audience is on the same level as the performers. Royal Arsenal, a former WWI munitions factory, occupies a huge site bordering the Thames in Woolwich. Though gentrified into “affordable” flats, most of the original industrial exteriors remain with numerous cannons decorating the site, which even encompasses a tank, making it a brilliant backdrop for a war play. Teatro Vivo and Greenwich &amp; Lewisham Young People’s Theatre exploit this unique setting to stage an intimate production&hellip;

Despite uncomfortable conditions, this was a well-performed and directed production in a fittingly historical setting.

Royal Arsenal, a former WWI munitions factory, occupies a huge site bordering the Thames in Woolwich. Though gentrified into “affordable” flats, most of the original industrial exteriors remain with numerous cannons decorating the site, which even encompasses a tank, making it a brilliant backdrop for a war play. Teatro Vivo and Greenwich & Lewisham Young People’s Theatre exploit this unique setting to stage an intimate production of Bertolt Brecht’s famous play.

Audience members are brought into the site in small groups and greeted by some of the ensemble who chat to us in character. I was grouped with the press and taken to the Recruiter (James Traherne) and Sergeant (Mark Stevenson). Hazel Bracken (citizen journalist) functions as an usher and Narrator with a loud hailer.

When scene one begins, we meet Mother Courage and her three children who trundle over from the other side of the park with her cart. Mother Courage is played by the excellent Denise Orita, who gives her a more modern, bohemian interpretation with plenty of attitude. Tomi Ogbaro plays her son Eilif and Dane Stephens is her other son, Swiss Cheese. Both of them are strong actors with high energy performances and good vocal projection.

Mother Courage’s mute daughter Kattrin, despite being limited to non-speaking vocalisations, evokes the most pity. This is juxtaposed with Kas Darley’s role as the prostitute Yvette, who by the end of the play has moved up in the world after marrying a colonel. Michael Wagg rounds off the cast as the Cook and the ancient Colonel in an excellent display of multi-tasking. His Cook evolves over the course of the story, demonstrating the ravaging effects of the Thirty Year’s War.

Brechtian staging conventions were adapted effectively by director Sophie Austin. Brecht’s trademark placards are replaced by the Narrator’s jarring interruptions by the loud hailer, providing vital context to a play whose action spans such a large time period.

All of the performers are skilled musicians, but not in the style of West End musical theatre – their sound is more earthy and “real” compared to the more polished, upbeat sounds of regular musical theatre. There are plenty of songs and the writing leaves us unable to empathise with the cast. Instead, we are disgusted by the world they inhabit and the lack of humanity in the characters themselves. For instance, by the conclusion of the play Mother Courage has experienced devastating loss yet she focuses on using her ever-present cart to profit from the war.

The actors remove the fourth wall by directly addressing the audience and quietly improvise with us when not in the scene. Several “audience members” even serve as a chorus. The site is completely open and I found it interesting to watch the reactions of passersby to the street theatre happening in front of them. In this environment, theatre is certainly still a popular public draw.

Though this production is a polished piece of site-specific street theatre, format inherently has its drawbacks. There is no seating and clocking in at over an hour and a half, this is a long time to stand on cobble stones. Whilst the production is advertised as a promenade, it makes no mention to the lack of seating. It also covers quite a distance, so there is a long walk between some of the scenes.

The production uses some lighting, but largely relies on streetlamps so as the sky gets darker it becomes more difficult to see what’s going on. This wasn’t helped by the fact that there were times when I was at the back of the crowd and could only see fragments of the stage. Fortunately, all of the actors had fantastic vocal skills and were audible for the majority of the time and the promenade format does possess some novelty appeal.