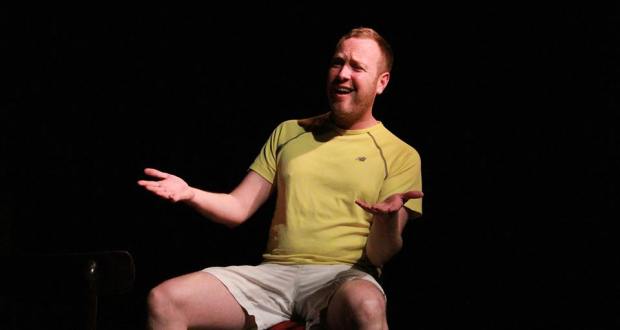 Pros: McGeough performs these clever scripts with wit and vivacity.

Cons: Some of the scripts could be pushed further; at times the stories lose their edge.
Mistaken, Etcetera Theatre – Review

Pros: McGeough performs these clever scripts with wit and vivacity. Cons: Some of the scripts could be pushed further; at times the stories lose their edge. Having done a show at the Etcetera this summer, I am well aware how uncomfortable it can get in the space on a hot evening… but knowing this doesn’t really make it any easier to sit there. Luckily, William McGeough’s performance does, as he deftly guides us through four unique but equally gripping monologues. Going to see a one-man show is big risk on the audience-member’s part – if they don’t like the&hellip;

We are in expert hands with actor William McGeough; he delivers these four monologues with warmth and individuality.

Having done a show at the Etcetera this summer, I am well aware how uncomfortable it can get in the space on a hot evening… but knowing this doesn’t really make it any easier to sit there. Luckily, William McGeough’s performance does, as he deftly guides us through four unique but equally gripping monologues.

Going to see a one-man show is big risk on the audience-member’s part – if they don’t like the actor, they can’t swap. Like an under-performing child or puppy with a piddling problem, they are stuck with them. No fear on that score with Mistaken though, as McGeough gets the audience on side quickly with cheery chap Lee. The story is well paced and McGeough plays Lee with an affable energy. Writer and director Nick Myles judges this piece nicely, teasing us all the way through. We are almost punished for our early investment in the likeable Lee but Myles draws us back at the last moment and the effect is rewarding.

After a brief voice-over mocking cheesy love songs to cover a costume change, McGeough returns as a young Yorkshire lad lost in the London gay scene. He is so sweetly naive and full of charming Northern affectations that we are instantly drawn to him. This time, we are punished as the character soon reveals his dark side, becoming increasingly unstable. Though this twist wasn’t written quite as subtly as it could be, the ending was powerful enough to win me back over.

Unlike his two predecessors, McGeough’s third character does not seem at all concerned with getting us to like him. His delivery is aggressive from the outset, a tone that seems at odds with his recounting of a sexual escapade. We soon realise why the character is so hostile and any credibility he has gained through his story for being open-minded quickly evaporates. His use of gender expression as an excuse for sexual assault draws repulsion in the audience, but the performance and writing of this moment are so wonderfully judged that it’s impossible not to be affected.

After such an intense experience, I needed some light relief and I’m sure the rest of the audience who were melting in the heat beside me felt the same. Indeed there was a collective exhalation of gratitude as it soon became clear that the last piece was hilarious. A motivational seminar by the effervescent self-help guru Natasha Stockridge, accompanied by a slideshow of well-timed images, make for a string of laugh-out-loud moments. There is a particularly brilliant convergence of script and visuals as Stockridge restyles Edvard Munch’s The Scream painting, which she previously used to represent suicidal thoughts, with a super-imposed smiley face and two thumbs up to symbolise a positive attitude. After using the previous characters of examples of bad behaviour, we slip into a more serious part of the monologue. Stockridge shows some real vulnerability as she recounts being jilted the day before her wedding, and it is here McGeough really earns his stripes, bringing out the depth and grit in an otherwise jokey script.

If there were to be any complaints about the show, it would be about the voice-overs. Although it’s hard to see how they could be avoided, the tone felt a bit too general and meandering. Sitting in the hot, dark room listening to musings about love, happiness and philosophy, it was easy to become frustrated quickly.

This small irritation aside, Mistaken makes for a wonderful evening of theatre that is both witty and provocative. Although Myles’ writing is occasionally a touch brash, the monologues are largely intriguing and sharp pieces of writing with McGeough’s stellar performances rounding off a superb night of new writing.