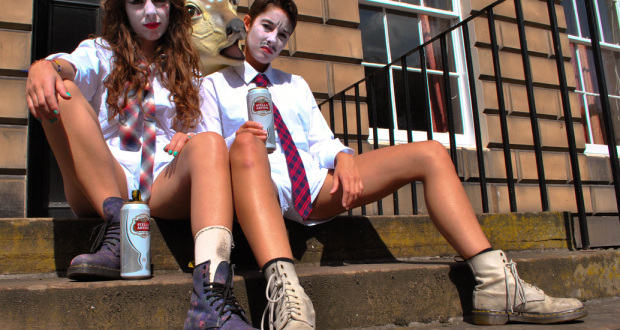 Pros: Two very different shows offer an interesting look at the way in which women are treated in the media and online.

Cons: Both productions play best to audience already invested in feminist politics – they are not for everyone.

Pros: Two very different shows offer an interesting look at the way in which women are treated in the media and online. Cons: Both productions play best to audience already invested in feminist politics - they are not for everyone. For the second year running, Camden People’s Theatre has opened its doors to the hottest young companies in the UK exploring the subject of feminism through the mediums of theatre, comedy, cabaret, dance and discussion. There is a wide range of material to appeal to many different kinds of audiences during the 3 week run of the Calm Down, Dear Festival. This&hellip;

Both productions are a bit rough around the edges but could be enjoyed by anyone who holds strong views on feminism.

For the second year running, Camden People’s Theatre has opened its doors to the hottest young companies in the UK exploring the subject of feminism through the mediums of theatre, comedy, cabaret, dance and discussion. There is a wide range of material to appeal to many different kinds of audiences during the 3 week run of the Calm Down, Dear Festival.

This theme for a festival is quite hard-going for my personal tastes. I found it to be occasionally abrupt and often felt that it unnecessarily attacks some lifestyles all for the sake of a good show.  This is not to say that I didn’t find some of it extremely interesting and, on occasions, quite funny.

Women’s Hour from Sh!t Theatre uses the BBC 4 radio show of the same name as its base to look at how the media views women and the sorts of sexism women face on a day-to-day basis. The show intertwines original material with real quotes from the radio program to show some of the ridiculous and often demeaning subjects which women are asked to talk about. The majority of the action is kept light; humour plays a role in illustrating the production’s message on gender issues. When subject matter veers toward truly horrendous, such as when they look at the vile forums targeting Emma Watson following her UN speech, they sing jaunty songs, littered with profanities, ensuring nothing gets too heavy, but still gets point across.

My primary issue with this production was that most genuinely funny moments were artificially extended beyond their natural lifespan. Episodes featuring the madness of Kinder eggs aimed specifically at girls or taxed, luxury tampons lost their hilarity when beaten over and over again.

Pretty Ugly created and performed by Louise Orwin is an extremely different type of performance. Although it was a little disjointed at times due to technology mishaps, Orwin’s show was an interesting, disturbing and upsetting look at the way young girls view themselves, how people treat others when they are anonymous and how a strong, confident woman can be broken down revealing a vulnerable and exposed young girl.

Orwin spent the year prior to this performance involved in a social experiment of her own making: researching the disturbing YouTube craze of young girls posting videos online asking “Am I pretty or am I ugly?” Creating three new personas for herself using different make up, wigs and cloths, she asked the same thing. This show is the result – the disgusting and vile comments posted by men and women.

The results themselves were not a surprise: primarily negative and disturbing male commenters. What was more interesting was the effect it had on her. By the end of the show, Orwin’s exhaustion was clear to see. This whole experiment had a profound effect on her and it is not something I could have exposed myself to.

The performance wasn’t a play as such; there were some acted sections, some projections on the wall of the messages she had received and sent, plus videos of the men she had spoken to. This was more of a dramatized lecture and an extremely interesting one at that. I was held in suspense waiting for the next piece of the drama to unfold while Orwin changed into a new costume or set up her camera.

Her final few minutes on stage are truly heart-breaking and it is tough not to be touched and moved by what she does. Feminist or not, this is definitely worth seeing.

Creator: Louise Orwin
Booking until: Pretty Ugly has now finished its run for Calm Down, Dear.