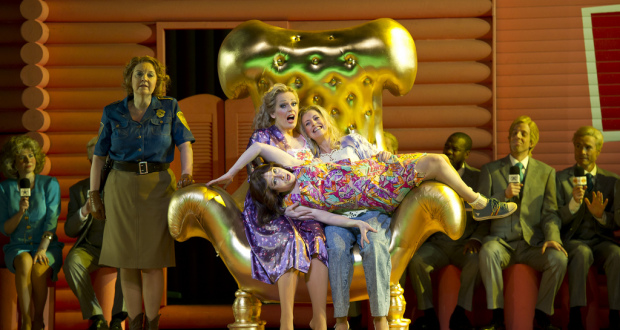 Pros: A strong cast leads a loud, brash, camp and in-your-face modern opera. Cons: Sadly no stand out songs. Anna Nicole. Two words that will make any octogenarian race for their inhaler. Her life is the classic rags to riches tale of a hard working single mom just trying to make ends meet. Mix that cliched tale with some drugs, deception, double Ds and a dead billionaire and you've got the makings for an out of this world contemporary opera. I'm prone to a good opera and love nothing more than bawling my eyes out as the leads, be&hellip;

A show so superb that its over the top glamour, glitz and profanity will leave you begging for more!

Anna Nicole. Two words that will make any octogenarian race for their inhaler. Her life is the classic rags to riches tale of a hard working single mom just trying to make ends meet. Mix that cliched tale with some drugs, deception, double Ds and a dead billionaire and you’ve got the makings for an out of this world contemporary opera.

I’m prone to a good opera and love nothing more than bawling my eyes out as the leads, be they star crossed lovers or tuberculosis riddled courtesans, more or less die by the final act. So as I took my seat in the Royal Opera House, and scanned all of the mini Anna Nicole Smith faces plastered all over the auditorium, I got quite excited as to what I was about to witness.

Mark Anthony Turnage’s Anna Nicole is a triumph. Move over Violetta. Step aside Butterfly. There’s a new opera heroine in town. This spectacular show, revamped and improved from its 2011 world premiere, is a spectacle that I can honestly say my retinas have never been exposed to before. From the very second the bright luminous pink silk curtain goes up you are instantly sucked (the opening line is “I wanna blow you all…”) into the trailer park and car crash life of one of Hollywoods greatest infamies.

Dutch soprano Eva-Marie Westbroek reprises the lead role and is captivating from the outset. She is on stage practically the entire length of the show and I thought she was outstanding. Throughout both acts I found myself rooting for Anna at one point and then suddenly being disgusted the next and that is a testament to Eva-Marie’s dazzling and seductive characterisation. Her transition from naive and innocent Anna to full on drug and fame obsessed Anna in the final years of her life was mesmerising. Her vocals were strong and powerful. Susan Bickley, playing Anna Nicole’s ‘bitch’ of a mother, was another stand out performance with gut wrenching vocals. Alan Oke as J Howard Marshall II, the octogenarian whose heart and bank account was stolen by Anna, was also glorious. His entrance on a giant floating stairlift had me in fits of hysterics. Howard J Stern, Anna’s manager/lawyer/lover/not-father-of-baby-girl, was played by US tenor Rod Gilfrey superbly.

All of the leads were supported by a very strong and massive chorus and it was here that I felt, musically, the show was at its strongest. Richard Thomas’s libretto, with all its C and F words, is sublime and Turnage’s orchestration is mammoth yet it does get lost in parts. I felt there were no stand out arias, but when the cast were all on stage together the sound was magical. In saying that, however, one song that really stuck with me was the song performed by teenage Daniel, played by Dominic Rowntree, while he was sitting in his body bag (“Ketamine, Methamphetamine, Cocaine, Testosterone…”). Very sad and poignant.

Miriam Buether’s set is out of this world! From a deep fried chicken shop to the giant matrimonial bed or from the strip club to the 48 hour disco, the colours, the props, the accessories and all of the small attention to details are simply mind blowing. They are off the scale! As Act Two descends into darkness and desperation, the subtle use of over the top prying cameras is beautifully executed and is so telling of the celebrity obsessed culture we forced Anna into.

This opera, superbly directed by Richard Jones, takes all of the traditional opera rules and necks them like a shot of whiskey with some painkillers and uppers! Go see it! I think this show will constantly be revived as our culture is forever evolving – although I’m not sure Kardashian would work as an opera…