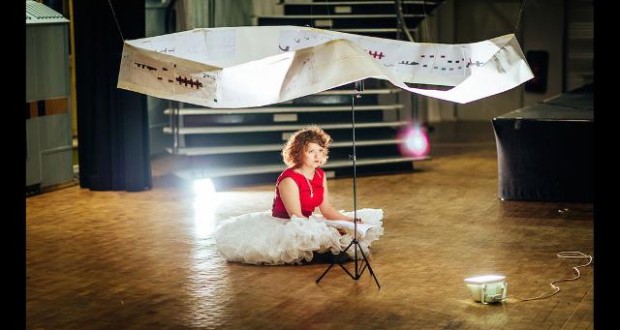 Pros: A morass of information on the nature of time for those who enjoy intellectual exploration

Cons: A morass of information on the nature of time ONLY for those who enjoy intellectual exploration
Aikainen, Arcola Theatre – Review

Using music to demonstrate, this production draws together many scientific theories and philosophical viewpoints on how we experience time. However, it does not lead us, so if you don’t get it, you’re on your own.

I love experiencing new things and taking risks in theatre can often be rewarding – but I’m always a bit wary going out of my ken. Having only brief flirtations with opera, and no scientific understanding, I was a bit uncertain attending Aikainen.

Unfortunately these concerns were confirmed. Whilst the website asks me to ‘Expect to be entertained’, my companion and I felt lost for most of it, even though it’s pitched as a ‘treat’ for avant garde lovers and technology enthusiasts (he’s a programmer).

We are asked to think consider time from a variety of angles. The show is split into 7 parts comprising of 5 acts, 2 interludes and a memory of another act, which either hasn’t happened, or happened before the show began, I’m not quite sure. Each part is a commentary, an exercise or an example of different ideas pertaining to the nature of time.

Various film clips of cartoons, computer experiments, future fashion predictions and so forth play in the background. There’s a pianist. violin, cello, clarinet, flute, and 3D printed ocarina, along with operatic vocalists. Not knowing much about opera, I can’t tell you what language it was in, and as an embarrassed mono-linguist, I couldn’t fathom it. There were also different languages spoken throughout the work. Whilst these related to place, I’m not sure they contributed to the theme of time, and this aspect certainly gave me even less to relate to.

The set was simple: just the instruments, and lit simply with a mobius strip hung from the ceiling. It had ‘science’ on it, please excuse my ignorance, but without a science background, plus annotations in other languages, I couldn’t tell you what they meant. It also looked rather battered, which was a shame as it gave the stage a rushed and unfinished look which was contrary to highly considered nature of the piece.

Each performer was dressed in black apart from the composer, the puppet master of the work who was in a colourful suit. I thought it was fantastic that one of the performers had an inflatable womb.

I can tell it was well researched, and there were some very clever symbolic snippets being portrayed and experimented with, but I feel that the creator, Miika Hyytiäinen, expects a wealth of prior understanding which I lack. The audience participation had lacklustre results, probably stemming from the same thing. Theatre students are far happier to leap into the space than a mature English audience.

This worked was developed in Europe and I think the attitudes of the production are carried with it – something that is actually stated by the composer as part of the piece. Personally, I think this would concept have worked delightfully as a museum/gallery promenade exhibit, broken into sections, appendixed, cited and with detailed labels explaining each segment that one could journey around and ponder in one’s own time.

If you enjoy process, European performance, or have a varied understanding of theories of time then you should enjoy this production. If, like me, you don’t, then I’m afraid you’ll probably feel confused throughout.

Freelance Arts Manager. Camilla took a degree in Pretentious Theatre and regretted it; took a job in theatre fundraising and was made redundant; sold herself into the arts slave labour market and couldn’t afford it. Taking a cushy job in property she started a better degree in Arts Management before getting made redundant again. In order to stop the number of redundancies outstripping the number of degrees she went freelance which in real terms means spending a lot of time in her dressing gown. This, thankfully, doesn’t take too many clients to support, although it feels a lot like being made redundant. She likes new writing, immersive experiences and all attempts to explore the intangible.