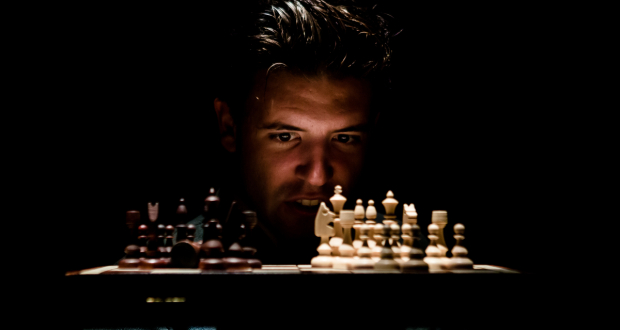 Cons: The drumming which runs throughout the performance can sometimes obscure the dialogue.
64 Squares, New Diorama Theatre – Review

Pros: A strong cast performing with practised ease. Physicality combines elements of dance and acrobatics that highlights the action. Expertly devised script and direction. Cons: The drumming which runs throughout the performance can sometimes obscure the dialogue. 64 Squares takes place on the cruise liner SS Triumphant in 1939, on which the enigmatic B is making his escape. He realises that the world chess champion Milko Czentovic is on board, and challenges him to a game: he's a chess expert, despite - as we later find out - not having touched a board since the age of 10. As&hellip;

64 Squares is a hugely entertaining evening of physical theatre, combining humour with questions of madness and identity. A fluid, choreographed performance in which the characters interact both acrobatically and emotionally.

64 Squares takes place on the cruise liner SS Triumphant in 1939, on which the enigmatic B is making his escape. He realises that the world chess champion Milko Czentovic is on board, and challenges him to a game: he’s a chess expert, despite – as we later find out – not having touched a board since the age of 10. As the moves unfold, we learn of B’s past as an accountant in an increasingly Nazi-leaning Vienna: charged with looking after the financial interests of his Jewish clients, he himself comes under suspicion from the authorities.

It’s said that a game of chess is never won, only lost. B has lost not only his name but his identity, as he struggles to explain his predicament both to himself and to the audience. B is played by three actors simultaneously – or, as he (or they) would have it, by four, the last being the drummer who keeps up a narrative rhythm throughout the performance. B’s lines may be spoken by any of the cast, while all of them perform his movements and expressions. In moments of high emotion they voice different thoughts at the same time, bringing to life the panicky confusion of the character. This confusion is exacerbated by the fact that the three cast members also perform all the other characters in the drama, from secret police to oil magnates.

The play has been not so much directed as choreographed. It’s an intensely physical production, in which the cast manhandle, twist and turn around each other with grace and fluidity: the three actors frequently occupy the same space, as well as the same personality. A simple scene in which they replace the chess pieces on a board to their starting positions becomes a balletic flurry of black and white pieces and grasping fingers, turning the mundane into the poetic.

As B tries to recall the circumstances of his downfall, he plays over and over in his mind the moment his hand chanced to touch that of his secretary. But was that all that happened? Did anything else take place in that moment, that could have led to his current state? Memory and identity are very much up for grabs as he struggles to both explain and remember how he came to be here at this moment.

The play has been adapted from the writings of the Austrian novelist Stefan Zweig, both by director Christopher Hamilton and by the devising cast of Julian Spooner, Matthew Wells and the superb Charlotte Dubery. There’s a perfection and polish here that speaks of many hours of rehearsal, with rarely a limb or a word out of place as the physicality of the performances intertwine with the overlapping dialogue.

Even the set performs admirably: a simple construction of board and scaffolding may in turn become a cell, a bunk bed, a casino and the prow of the ship, as it’s spun around on wheels to glide smoothly into its next scene.

Fred McLaren’s drumming, which runs throughout the production, only occasionally threatens to obscure the dialogue. For the most part, it sets the scene, whether it’s the sound of brushes on the snare drum producing the swell of the ocean, or rimshots that portray the clank of the engine room, or the rattle of the dice in the ship’s casino.

This is an exuberant, entertaining production that manages to be both funny and poignant, combining mime, melodrama, subtlety and acrobatics. The small, intimate space of the New Diorama brings the audience right into the action, as we’re carried along by the enthusiasm and verve of the performers.