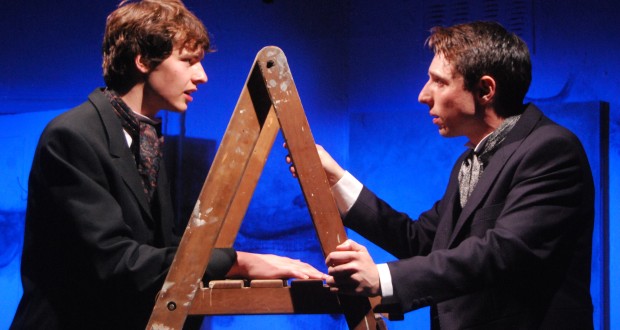 Cons: None, except that the venue turns the aircon off during the two acts so it gets a bit hot.
The Picture Of John Gray, The Old Red Lion Theatre – Review

Pros: Original script, powerful performances &amp; stellar direction. Cons: None, except that the venue turns the aircon off during the two acts so it gets a bit hot. The Picture of Dorian Gray has always been one of my favourite books. From first reading it at school to adapting it into a two hander play for the Fringe (yes I played Lady Sybil) and from watching every movie or miniseries adaptation, this book has always been a constant in my life and I felt I knew all there was to know. Suddenly along comes a play, with a similar&hellip;

A class act! A strong ensemble cast tells a never heard before true story that needs to be seen to be believed!

The Picture of Dorian Gray has always been one of my favourite books. From first reading it at school to adapting it into a two hander play for the Fringe (yes I played Lady Sybil) and from watching every movie or miniseries adaptation, this book has always been a constant in my life and I felt I knew all there was to know. Suddenly along comes a play, with a similar name, that shows me I knew nothing at all.

The Picture of John Gray is undoubtedly one of the best pieces of theatre I have ever seen. The completely original work documents the true story of an apprentice metalworker and wannabe poet from Bethnal Green, John Gray, and how he inspired Wilde’s infamous masterpiece on obsession, vanity, decadence and murder. The play, through some beautifully touching and honest scenes, also delves into ‘the love that dare not speak its name; in the Victorian era and the ripple effect that Oscar’s indecency trial had on all those associated with him. It’s gripping from the outset.

Patrick Walshe McBride shines as John Gray and his fresh-faced youthfulness (that only Dorian could wish for!) combined with the depth and maturity he brings to the role makes him an actor to watch out for. Christopher Tester as the guarded French critic, Andre Raffalovich, took my breath away, his character was so beautifully portrayed you could feel Andre’s passion and pain in his love for John. The two-hander scenes with both Christopher and Patrick, especially in Berlin, are so strong that I, like their characters John and Andre, found myself in floods of tears. Granted I cry at anything, but these men’s raw performances were outstanding.

Another acting tour de force comes from the duo Jordan McCurrach, who plays Charles Shannon, and Oliver Allan, who plays his partner Charles Ricketts. Both characters are perfectly formed and they are sincere, enchanting and not so bad on the eye. I found my heart breaking in their final scene together, holding my husband’s hand, as Shannon says, “If only we lived in another era.” Tom Cox as Bosie was beautifully annoying and his portrayal made me love to hate him and I found myself looking forward to him walking on stage to stir things up.

All five actors work incredibly well as individual stand out characters, as well as a strong, united and finely tuned ensemble and that is a testament to Gus Miller’s outstanding direction. From a hidden glance to a warm embrace or from a glass of wine being poured to tearful gut wrenching goodbyes, you can see that Gus has thought of every single move and breath of each character and their journey.

Another stand out for me was the beautiful words from CJ Wilmann’s original script. His text brimmed with wit, flowed with passion and was like a velvet melody to my ears. Oscar Wilde would be proud. It’s been a while since I’ve watched a story so well paced, superbly researched and engaging.

My only negative was the heat in the venue as the aircon was turned off during performances. In saying that however, you don’t care as the play, which is now completely sold out, grabs you right from the beginning and I hope to soon see it in it’s rightful place on London’s West End.

Previous: Jezebel, Soho Theatre – Review
Next: The Comedy of Errors, The Museum of The Order of St John – Review