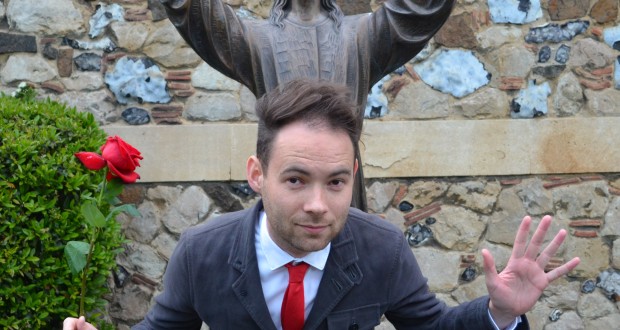 Pros: The confident stand-up of a seasoned pro with excellent timing. His bizarre experiences make excellent fodder for his act.

Cons: The material is a little bit one-note, with a few pretty tasteless punch lines thrown in.
Luke Stephen – Peace, Love and Not Understanding, Hen and Chickens – Review

A show that had ninety-nine percent of the audience laughing almost constantly. Close to the bone humour for a young crowd.

We get to know Stephen pretty well as he shares the ups and downs of his last three years of relationships and his quest to ‘normalise’ his life alongside his almost-thirty, married/or soon-to-be, baby-having, house-buying peers.

Stephen’s is a story of loved up friends, baby-picture flooded Facebook timelines and feeling the pressure in his search for Mrs. Right only to find out he is Mr. Wrong. Along the way, Stephen gets himself into some pretty unbelievable situations with comedic value and punch lines that serve themselves up on a silver platter. It plays to the insecurity and experiences to which both men and women, hurling their way towards the big 3-0, or even worse, living it already, can relate.

Stephen handles his audience expertly and with quick wit, able to weave in and out of his well practiced routine to grab a joke out of the ether, or to pick up on the audience’s inadequacies.

Stephen’s style is a raunchy sense of humour which is not to my taste (but had the majority of the audience splitting their sides, so what do I know?) and the ‘I am a sexual failure’ note got a little tedious and is nothing new on the comedy circuit. His best moments, I thought, were his astute forays into social commentary but his bid to be outrageous did cross the line, in my opinion, into the completely distasteful in an unfortunate crusade for shock-factor laughs that are really not funny at all.

That being said, Luke Stephen has honed his mostly-likable and slightly pathetic rogue persona into a well-performed act of skillfully written material delivered with excellent timing. To most, this would be a top- notch comedy act, not to be missed.