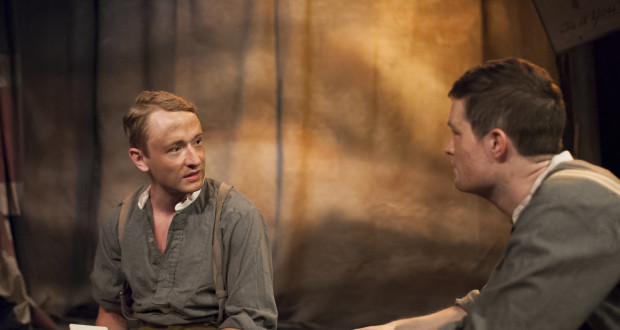 Pros: A topical, moving production looking at the story of one of the millions of men killed in WWI. Moving, polished and incredibly professional.

Cons: Though advanced for what was originally a TIE (theatre in education) play, the characters were slightly underdeveloped.

The Jack Studio Theatre, though a pub fringe venue, is one of the most professional and high-quality in London. This production was consistent with its goal of promoting excellent new writing. On first impressions, the superior set evoked the patriotic idealism of small town England at the start of WWI. It was so well-designed and well made by the talented Dave Benson,  that it would easily have been at home on West End stage. A light dose of smoke and dim light juxtaposed the propaganda posters and huge union jack.

The play uses a non-linear structure to tell the story of Billy Dean, a volunteer solider from Bradford, sentenced for cowardice in the face of the enemy. We see his journey from a naïve newlywed, convinced of the glamour of war, to someone broken by the realities of it. An accidental chain of events led to his sentencing and death. His story is told through flashbacks as he waits execution. The script was originally created by Belgrade Theatre’s TIE company so no writer is credited. The flashbacks are regular but not too often to forget present setting and gradually reveal the story with good pace. There is an excellent use of foreshadowing, particularly when Billy’s wife is making bullets in a munitions factory as he writes her a letter explaining that he is to be shot. The best element of this production is the script and story. With a raw, extremely human perspective, they look at an element of the First World War that is often overlooked. Even though the ending is rather abrupt, to alter it would take away from the harsh circumstances.

The performances are good, but not outstanding. This is mostly because the characters were written without a great deal of depth but they still suit the story as they are. They are nonetheless, unexpectedly advanced for a production that started in TIE. Tom Woodward as Tommy / Private Walsh was the most captivating and had some enthralling scenes, particularly with Pearce Sampson’s Billy Dean. Billy and his wife May (Mabel Wright) shared some exceptionally sweet moments, providing stark contrast to Billy’s life in the trenches. Neil Hobbs as the Sargent Major was alarmingly shouty but heartened the audience with a poignantly quiet scene with Billy in the second half where he begins to admit that the war seems to have no point.

The costumes were of a high calibre for fringe theatre; even more impressive as I can imagine decent WWI uniforms will be hard to come by in the midst of the current WWI centenary commemorations. Althought there were some barely noticeable, minor inaccuracies, costume designer Lorena Sanchez’ creative talent certainly shined through. Sound designer Max Thompson’s relentless bomb blasts during scene transitions became predictable, but perhaps that is part of the atmosphere he wanted to create. We certainly never forgot the world of the play was amidst the front lines of WWI.

This is a story that definitely needs to be performed again. Director Elizabeth Elstub handled it clearly and simply, without any complex directing trickery. She let the story speak for itself, mournfully reminding us that Billy Dean was one of hundreds of souls to be shot for cowardice or desertion and one of millions to die in the years of WWI trench warfare. 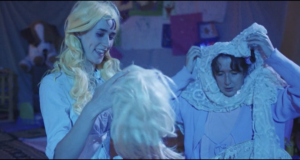