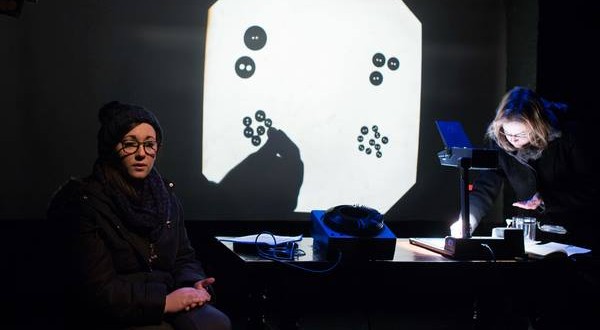 Pros: A nifty mix of theatre forms and media produces an array of vivid characters and moving stories.

Cons: The balance of personal sentiments tipped towards indulgence at points.
Buttons, The Space – Review

Pros: A nifty mix of theatre forms and media produces an array of vivid characters and moving stories. Cons: The balance of personal sentiments tipped towards indulgence at points. Buttons is about two friends’ telling of their journey to the Auschwitz-Birkenau concentration camp memorial and museum in Poland. Written and performed by puppeteer Joni-Rae Carrack and dramaturge Dana Segal, this hour-long piece is an impressive blend of live performance, spoken word, shadow puppetry and object manipulation. Entering the theatre hall at The Space, you see on stage a table with a slide projector on it. I must admit that&hellip;

An admirable blend of puppetry and storytelling from two relaxed and likeable performers.

Buttons is about two friends’ telling of their journey to the Auschwitz-Birkenau concentration camp memorial and museum in Poland. Written and performed by puppeteer Joni-Rae Carrack and dramaturge Dana Segal, this hour-long piece is an impressive blend of live performance, spoken word, shadow puppetry and object manipulation.

Entering the theatre hall at The Space, you see on stage a table with a slide projector on it. I must admit that it made me think of the joke that the then 88-year-old actress Betty White made in her monologue on Saturday Night Live, where she says that in her day seeing pictures of people’s vacations was considered a punishment! A big part of this production is doing just that – two young women talking about their trip, from start to finish, but in a much quirkier and relaxed fashion. An additional self-referential aspect is that the girls know in advance of the trip that they plan to make a show about it, and they are able to use their uncertainties about this as way to talk about some of the difficulties they face in expressing some of the appalling things they see.

The duo’s likeable and informal approach to storytelling really works well and they have great chemistry and timing throughout. There is something refreshing about their casual arrival, turning up with their coats and backpacks and chatting openly to audience about the play they are about to perform. Dana is Jewish and the organised one; she has a daily plan of events she shares with the audience. Joni is not Jewish, and she anxiously struggles with her confidence and ability to own her experiences publicly.

There is a suitable balance of light-hearted jokes interweaved with serious and harrowing stories from Auschwitz. The latter includes factual accounts from their trip, as well as the enactment of personal memories of some of Dana’s family members. An uncle’s strange eating habits, a cousin’s excruciating five years in hiding from Nazi soldiers, and an aunt’s defining moment in a concentration camp are explored powerfully using puppetry and object manipulation. Both performers work well to bring these characters and their stories to life.

The friends’ on stage anxiety and struggles are, for me, the less dramatically interesting aspects of the show. They leave me with the impression that a tighter, more controlled production is called for. It would be nice to see more frequent and developed use of the puppets, the vast array of props, and the narration of more stories of survivors that the performers worked so well.

Mostly, I like how the writing incorporates and sustains the central motif of buttons. They show up in a variety of forms, and the figurative clarity of two dots and round vacant faces put in mind the inexplicable doubt and terror of those subjected to unimaginable cruelty. Even a packet of chocolate buttons shows up, but they’re just offered to the audience for comfort. Overall, this first production from Sort of Theatre makes an admirable case for the use of puppetry for conveying difficult topics that are hard to talk about directly. And with a greater push towards the storytelling, this could be a really great show.

I’ve now been to The Space theatre several times, but only noticed, getting off the D3 bus this time, that the stop sign display on the bus now includes ‘The Space Theatre’ as part of the ‘Crews Street’ stop name. The staff at The Space told me it took the mighty hand of Boris Johnson to bring about this small but not insignificant change. This is surely yet another sign that highlights this East End theatre’s ongoing rise to prominence.