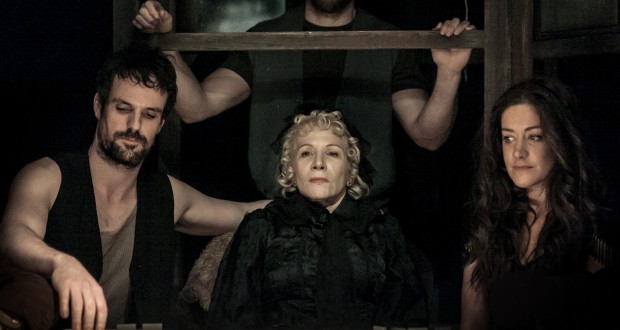 This week we’re giving away tickets to a musical adaptation of a French classic! Enter now.

We’re delighted to have teamed up with the Park Theatre this week to bring you the opportunity to win a pair of tickets to their sell-out production of Thérèse Raquin, courtesy of Boom Ents. The tickets are valid for any performance (runs 31 July – 24 August 2014), subject to availability.

As always with our competitions, there are no catches – you simply complete the entry form below by 6.00pm on 18 July 2014 and you’ll be entered into our prize draw. If you’re the lucky winner you’ll hear from us the next day. It really is that simple!

Sadly this competition is now closed!

Following the sell-out success of its premiere at the Finborough Theatre, this startling new musical adaptation of the classic French novel Thérèse Raquin transfers to the Park Theatre.

1860s Paris. In a small dusty haberdasher’s shop near the Seine in the dank, narrow Passage du Pont Neuf, the young and beautiful Thérèse Raquin is trapped in a loveless marriage to her sickly cousin, Camille. Thérèse spends her days confined behind the counter of a small shop and – every Thursday evening – watching her domineering aunt, Madame Raquin, play dominoes with an eclectic group of ne’er-do-wells. Until the Thursday evening that her husband Camille brings an old friend to the party – the alluring Laurent – and she embarks on an illicit affair that leads Thérèse to abandon all her inhibitions and loyalties as their brutal and overwhelming passion overturns both their lives and has results that nobody could have foreseen…

In keeping with the innovative and challenging nature of the original work, this is a radical new musical adaptation using music and lyrics to heighten and distil the underlying themes.

Previous: An Ideal Husband, Tabard Theatre – Review
Next: Much Ado About Nothing, Russell Square Gardens – Review