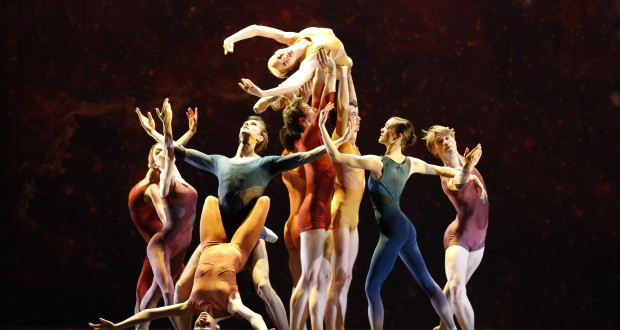 Pros: An excellent company of dancers performing with precision and grace.

Pros: An excellent company of dancers performing with precision and grace. Cons: Uneven running times give a disjointed feel to the production. Situated next door to the London School of Economics, the Peacock Theatre looks like an anonymous office block from the outside. However, once inside, the auditorium is an impressive setting for the New English Ballet Theatre’s five part premiere combining visual art, music and dance. Act One commences with Tangents, a simple though dramatic study of relationships set to the haunting 'Pictures at an Exhibition' by Mussorgsky. A simple piano accompaniment gave four paired dancers time and&hellip;

Some brilliantly executed pieces, but of limited appeal to mainstream audiences.

Situated next door to the London School of Economics, the Peacock Theatre looks like an anonymous office block from the outside. However, once inside, the auditorium is an impressive setting for the New English Ballet Theatre’s five part premiere combining visual art, music and dance.

Act One commences with Tangents, a simple though dramatic study of relationships set to the haunting ‘Pictures at an Exhibition’ by Mussorgsky. A simple piano accompaniment gave four paired dancers time and space to express the theme of pain in relationships. An exploration of relationships through dance doesn’t appear to be a natural match for Mussorgsky’s brooding, introspective classic. However, they make it work through sheer energy and commitment. In contrast, Orbital Motion uses the contemporary classical piece Violin Concerto No.1 written by Philip Glass. A dramatic score beautifully facilitated the dancers’ sharp dexterity. While the music was beautiful, I was disappointed the tracks were recorded as opposed to provided by a live orchestra. The third piece, Toca signalled a change of pace using the music of Brazilian composer Heitor Villa-Lobos. A solo Latin guitar paces a couple as they interpret the story of a brother and sister separated when they were young. They meet as adults, unaware they are siblings and fall in love. A harrowing story told with characteristic Latin panache.

Mad Women concludes the first act, and is without doubt the truly outstanding piece in the production. Five girls dressed in orange pants and head scarfs represent visually perfect females taking control of a world hitherto dominated by men. The music is drawn from a wonderfully diverse montage of recordings, ranging from Irving Berlin’s ‘Get Thee Behind Me Satan’ (wisely using Ella Fitzgerald’s version) to the original American radio ads for Camel cigarettes. It crackles with attitude and humour, providing a welcome antidote to the drama of previous pieces.

Act Two is given over to Kreutzer Sonata, a challenging marriage of Tolstoy’s novella and Beethoven’s ‘Violin Sonata No.9’. A string quartet backs the company as they act out a darkly disturbing tale of love, sex and obsession in Russia circa 1880. The main protagonist, Pozdnyshev, marries a beautiful woman whom he believes to be the perfect wife. However, as a loveless marriage becomes apparent, he grows increasingly violent towards his wife. Pozdnyshev invites a violinist, Trukachevsky to accompany his wife on piano. Pozdnyshev grows increasingly frustrated and jealous of the chemistry between his wife and the violinist. As the story unfolds, dancers are called upon to act their roles. Acting without dialogue in exaggerated gestures made the piece look more like a silent movie than a dance piece. Although Kreutzer Sonata represents the show’s climax, I don’t feel it worked as well as Act One. The timings were also puzzling. The first four pieces had some symmetry with each running at around 20 minutes. But the final piece ran closer to 40 minutes.

Overall, it was a highly competent, polished production, but feel it lost impetus in Act Two. The New English Ballet Theatre deserves great credit for nurturing and promoting young talent. However, for genre itself, I don’t feel it will win over any new converts. This one is for serious ballet fans only.