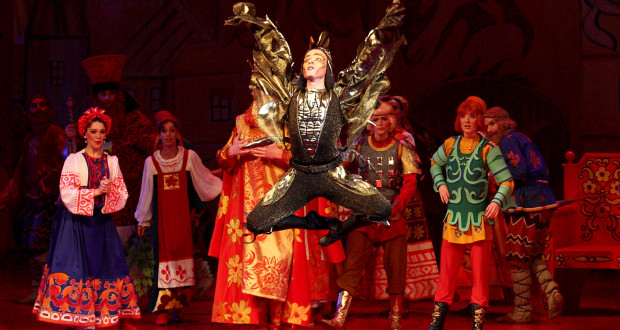 Pros: Bright, colourful and energetic production of some of Russia’s most unique operas and ballets.

Cons: As it was a gala performance, the show lacked pace due to being broken up into too many segments.
Diaghilev Festival Gala, London Coliseum – Review

Pros: Bright, colourful and energetic production of some of Russia's most unique operas and ballets. Cons: As it was a gala performance, the show lacked pace due to being broken up into too many segments. If there's one thing the opening and closing ceremonies of the Sochi Winter Olympics taught the world, it's that Russia is the birthplace to some of the most incredible icons of literature, music, opera and ballet. With the Ukraine crisis, shocking gay rights violations and Putin’s occasional topless hunting pics, it's easy to let Russia's current face allow us to forget its rich heritage&hellip;

An incredible programme of Russian opera and ballet that had us all clapping until our hands hurt!

If there’s one thing the opening and closing ceremonies of the Sochi Winter Olympics taught the world, it’s that Russia is the birthplace to some of the most incredible icons of literature, music, opera and ballet. With the Ukraine crisis, shocking gay rights violations and Putin’s occasional topless hunting pics, it’s easy to let Russia’s current face allow us to forget its rich heritage and diverse culture.

As part of the UK-Russia Year Of Culture 2014, the ENO invited Les Saisons Russes du XX1 siècle to stage a season of legendary works that honour three of Russia’s greatest cultural icons, namely Sergei Diaghilev, Nikolai Rimsky-Korsakov and Pyotr Tchaikovsky (two of which just happened to be gay by the way). Les Saison Russes is a ballet and Opera Company, set up by Sergei Diaghilev back in 1905, which has become the who’s who of top Russian talent. Diaghilev produced some of Russia’s most famous productions and this gala performance, at the London Coliseum, was a series of highlights from the past week’s festival celebrating not only his works, but also his influence on Russian culture. First up we had Scheherazade, a ballet based on the story of one of the fairy tales of A Thousand and One Nights. It was breathtaking. The lead dancers Julia Makhalina and Artem Yachmennikov captured the two tragic (yeah… it doesn’t end well) lovers beautifully. The score by Rimsky-Korsakov was captivating from the outset and set the drama beautifully. I may have shed a tear at the end.

Next up was the final scene from Coq d’Or (The Golden Cockerel), which was a unique, if not slightly odd, combination of both ballet and opera. As a massive fan of both mediums I couldn’t work out who I should be watching more of. The opera singers on the edge of the stage narrating away or the ballerinas jumping up and down? This was apparently Diaghilev’s original idea as he felt that ballet and opera deserved to be side by side. It was stunning. The bright colourful set, based on the 1913 original by Vyacheslav Okunev, was a delight to behold.  I honestly thought I was watching a box of Quality Street perform with the cerebral colour overload I was experiencing. Yury Deynekin, under the eye of choreographer Gali Abaidulov, gave a strong performance as King Dodon, as did Petr Melentiev as the astrologer. Once again Rimsky-Korsakov’s rarely-performed musical score was captivating, moving and tender.

The final act was the second act from Alexander Borodin’s opera Prince Igor.  Directed by Andris Liepa, and with some of the fasted ballet moves I’ve ever seen choreographed by Michael Fokine, this was a showstopper. Seeing the entire cast jump, pirouette and do the traditional Russian squat-leg-kick-dance en masse was out of this world!

Sadly the Diaghilev festival has now finished, but definitely one to keep an eye out for should, depending on Putin’s next move, it ever return to the UK.