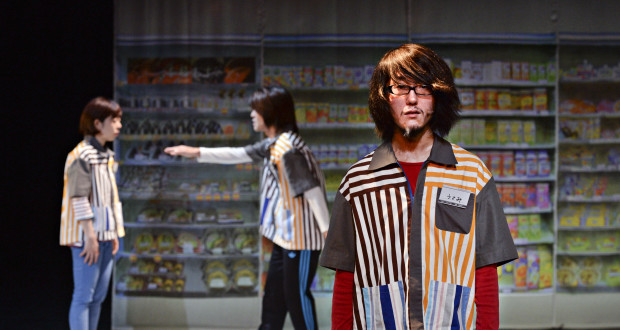 Pros: This soothing, minimalist production is hypnotic to watch and makes intriguing on the drudgery of modern life.

Pros: This soothing, minimalist production is hypnotic to watch and makes intriguing on the drudgery of modern life. Cons: This 'slice of life' production where nothing particularly dramatic happens can become repetitive. Abstract, expressionist movement was used constantly, which became tiresome. One of the first things that struck me about Arts Depot’s main theatre is how comfortable the seats are, even though this South Londoner wasn’t keen on travelling to North Finchley (That’s practically Manchester, right?) It may seem trivial, but after seeing numerous productions in hot pub theatres on benches with straight backs, no padding and being in&hellip;

A fascinating commentary on modern Japan - thought provoking and humorous, but tedious at points.

One of the first things that struck me about Arts Depot’s main theatre is how comfortable the seats are, even though this South Londoner wasn’t keen on travelling to North Finchley (That’s practically Manchester, right?) It may seem trivial, but after seeing numerous productions in hot pub theatres on benches with straight backs, no padding and being in pain the next day, comfort does become important. The set was austere: two screen printed flats placed at a right angle showing the shelves of a modern convenience store and a small screen above for the projected surtitles. Some thin mats in the floor indicated the aisles. The set glowed in the lighting, creating a calming effect.

We quickly meet the two main characters. These young men work at the convenience store. We also encounter the store manager, a couple of customers, a new part time female staff member and the area manager from head office. Whilst there is no traditional narrative structure, we see snapshots of shop life. Of the two young male staff, one is disenchanted with his job, whilst the other has been hypnotised by corporate life and finds joy in scanning bar codes and ordering stock. The store manager is of similar ilk; he celebrates his suggestion to change the way cashiers hand change to customers being taken on nation-wide by the company. The absurdity of this corporate environment is obvious and makes me shudder to think how easy it is to be sucked in as a young person seeking purpose. The female part timer also absurdly resigns in dramatic humiliation after making a small mistake.

This same absurdity comes through in the customers, we see one young woman who, upon discovering her favourite ice cream has been discontinued, has a meltdown. Another is a man who comes into the shop, never purchases anything, and is rude to the staff yet they continue to thank him every time he leaves. The general manager from head office makes all of his statements over a booming, echo-y microphone in what is clearly a small store. It is an existence of small tragedies, self-importance and the need to cling onto any kind of meaning in a cold, corporate world.

Whilst the dialogue in the play tends to realism, the movement is abstract, expressionist and constant. It is mostly light and flowing; resembling tai chi. When a character is aggravated, the movement and choreography becomes rougher and more aggressive. Whilst it has its own humour at times and often juxtaposes or reinforces the tone of the dialogue, it loses meaning quickly and can be distracting.

Super Premium Soft Double Vanilla Rich is in Japanese, with surtitles projected above the stage. This makes it harder to gauge the quality of the acting, but all of the actors (Makoto Yazawa, Tomomitsu Adachi, Azusa Kakikura, Hideaki Washio, Shuhei Fuchino, Shingo Ota, Mariko Kawasaki are all credited as performers) seemed engaged and connected to their characters.

The production is certainly a learning experience about Japanese culture and individual response to it, but is also relevant to our increasingly corporate lifestyle. The entire piece had a meditative effect because of a repetitive soundscape and the soothing sound of a language you don’t understand, but the messages were far from soothing. It is a good piece of physical theatre and an excellent ambassador for the LIFT Festival.

Director/Author: Toshiki Okada
Producer: Chelfitsch
Booking Until: This production has finished its run