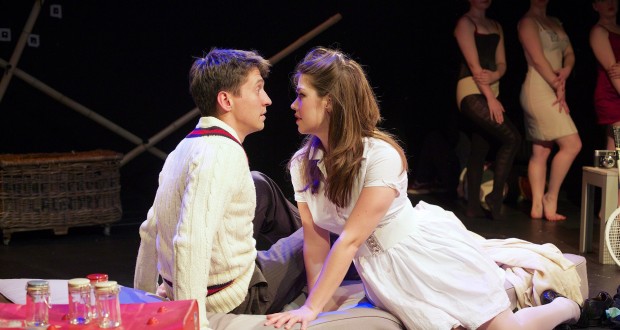 Pros: A short show with some fantastic performers.

Pros: A short show with some fantastic performers. Cons: Some misuse of stage and confusing content. The Blue Elephant is hidden in a concrete jungle, and if it wasn’t for the blue elephants on the pavement guiding the way, you could easily miss it. The venue is divided into two sections: upstairs contains the bar/seating and downstairs is the actual theatre. I was met by Niamh and Jo, the acting artistic directors of the Blue Elephant. Jo gave me a quick heads up about the theatre itself, which is very community-oriented. After my quick chat, drink in hand, I&hellip;

An energised play with some West-End worthy performances.

The Blue Elephant is hidden in a concrete jungle, and if it wasn’t for the blue elephants on the pavement guiding the way, you could easily miss it. The venue is divided into two sections: upstairs contains the bar/seating and downstairs is the actual theatre. I was met by Niamh and Jo, the acting artistic directors of the Blue Elephant. Jo gave me a quick heads up about the theatre itself, which is very community-oriented. After my quick chat, drink in hand, I headed downstairs to the theatre. It really is a great performing space, a spacious stage with a capacity of about 50 people, intimate but not too intimate.

I knew very little about the show I was going to see. All I knew was that it was three extracts from a musical called Hello Again. Later on, I found out that Hello Again was first produced in 1994 off Broadway and performed in the West End in 2001. It turns out that the show had not been performed since then and that’s why Play Pen Productions were performing scenes of the musical in order to test the waters. The show is based on the 1897 play La Ronde by Arthur Schnitzler and focuses on a series of love affairs among ten characters during the ten different decades of the 19th century.

The opening song sung by “the whore”, played by Emile du Leslay, sent shivers down my spine. She sung the song with ease, and was very convincing at telling a story. Her counterpart, “the soldier”, played by Shaun Chambers was also good, however he truly shined when singing his somewhat macabre song to a nurse. Although at times his voice seemed somewhat croaky, the more subtle notes were hit with pin point accuracy. My favourite part of the show was the nurse’s song in relation to the injured young man. The scene was energised and Ella Vize and Joshua Brant gave a show-stopping performance. Brant portrayed a naive but sexually charged man with subtle ease which made the whole scene very watchable. But what really caught my eye was Vize’s performance. Her vocal range, sultry voice and excellent acting made the scene funny, dramatic and sexy.

Unfortunately, I have to say that the show itself seemed quite messy. I do realise that these scenes were works in progress, however there were a few major issues. The staging at times was a little clumsy, in particular during the sections between the soldier and nurse. The use of the ensemble was generally good, however their mirroring of the sex scenes became somewhat comical. The use of the mirror to show a scene change was interesting but quickly became repetitive. Finally, the meaning of the story was unclear. I did not notice that the show was travelling through time, it seemed to me it was all based in the same era.

Overall the show was great, even though the scenes changes were messy and the content was not very clear, the level of acting/singing made up for it. When the show finished I was left wanting more. I couldn’t believe how quickly those forty five minutes had gone.

Unemployed but not a slacker. Andrew believes that he was dropped in a tub of theatrical acid as a child. Although he did not gain the ability to fly, see through solid objects or shoot laser beams out of his eyes he did gain an intense profound love for everything theatre/TV/film related. He recently worked as an agents assistant in a busy Soho office and is currently looking for work. When he is not viewing theatre, acting or writing you can find Andrew on a platform 10m up in the air, swinging about like a chimpanzee. Did I say swinging, I meant flying. It seems that Andrew is a superhero after all.