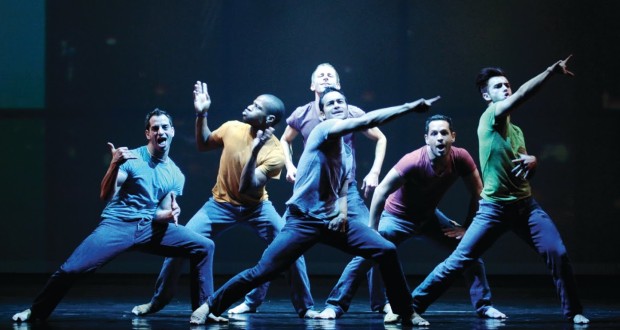 Pros: A proper spectacle with talented dancers, flashing lights and glittery dresses. Cons: There’s enough cheesiness here to make a decent fondue. Pop-ballet it’s called, the eclectic style championed by American company the Bad Boys of Dance. It’s a combination of classical ballet, modern dance and athletics, all set to a soundtrack of familiar pop tunes. After several years of successful international touring, the company is now performing their show Rock the Ballet in the UK for the first time. The first act is remarkably cute for a company going by such a bad-ass name. Over the course of&hellip;

Pop-ballet it’s called, the eclectic style championed by American company the Bad Boys of Dance. It’s a combination of classical ballet, modern dance and athletics, all set to a soundtrack of familiar pop tunes. After several years of successful international touring, the company is now performing their show Rock the Ballet in the UK for the first time.

The first act is remarkably cute for a company going by such a bad-ass name. Over the course of nine songs by popular artists the audience witnesses the burgeoning relationship between the male and female principals, James Boyd and Kaitlynn Edgar. This involves coy flirtation on her side, displays of manly power on his, and a lot of running either away from each other or into each other’s arms, to the sounds of love songs like I Don’t Want to Miss a Thing and With or Without You. The melodrama eases up a little in the routines where the rest of the company is involved, but those moments are less common than I’d personally like them to be.

The second act is a much tighter affair, which, ironically, is largely thanks to the absence of a storyline. The songs don’t serve any other purpose than giving the dancers a reason to show off their skills; it seems a much more sensible approach for a company that clearly aims to wow. The feeling you’re watching a series of music videos extends to other areas too: both Edgar and her male colleagues get some hefty objectification thrown their way. This culminates in a routine by the male dancers to Sexy and I Know It that basically comes down to them showing off their abs and doesn’t involve any actual dancing.

Issues like these aside though, Rock the Ballet is a spectacular show. The combination of classical moves with various more contemporary styles results in an enticing and explosive mix. The dancers have that effortless air about them that only comes with real skill, and this professionalism makes even the toughest displays of flexibility and strength seem easy. They know how to play to their audience too; by the end of the second act a move as simple as raising an eyebrow had the crowd cheering and whistling.

It’s not just the dancers that know how to put on a show. Artistic director Adrienne Canterna clearly believes in more is more. Light in every imaginable colour beams onto the dancers from above and from the sides. There’s moving light, flashing light, colour-changing light and a seemingly endless supply of gobos – templates that are used to project patterns onto the stage. And if that weren’t enough, there’s a giant screen that provides an ever-changing video background. The result is at times overwhelming, but nevertheless it works.

Rock the Ballet is brash, showy, over the top, incredibly cheesy and doesn’t show the slightest hint of self-awareness about any of this. But that conviction is also its saving grace, and makes it such an unashamed crowd-pleaser. Rarely have I experienced such a party atmosphere in the theatre. Anyone wanting subtlety and restraint will find themselves sorely misplaced here, but to be fair, these would be strange qualities to expect from a company called the Bad Boys of Dance. No, this show is about simple, sexy fun, and that’s something these guys do very well indeed.

Tagged with: Adrienne Canterna Bad Boys of Dance I Don’t Want to Miss a Thing James Boyd Kaitlynn Edgar Peacock Theatre Pop-ballet Rasta Thomas Rock the Ballet Sadler’s Wells Sexy and I Know It Slider With or Without You