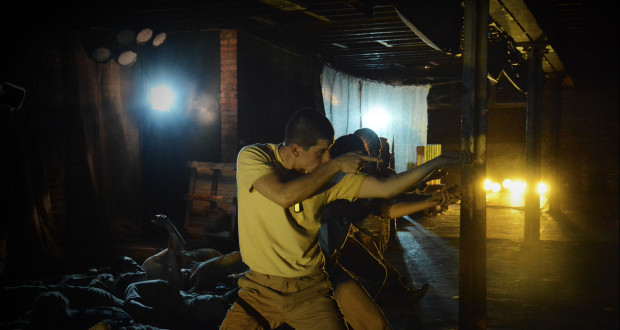 Pros: This is a visually arresting, contemporary production of a rarely seen Greek tragedy in a unique space.

Pros: This is a visually arresting, contemporary production of a rarely seen Greek tragedy in a unique space. Cons: Initially immersive, the contact doesn’t carry through for the entire production. Trinity Buoy Wharf was new to me as a venue, but certainly worth the trip. It is far from a conventional performance space, even by fringe standards. It is spread over two long rooms in the basement of a former warehouse on the Thames. There is no obvious stage or audience space but this makes it completely flexible. Rhesus uses both rooms in semi-promenade style very well. Excellent lighting&hellip;

This is a showcase of students coming to the end of their training where few stand out, but it is a play with a clear, effective concept and an ensemble that invest a lot of effort.

Trinity Buoy Wharf was new to me as a venue, but certainly worth the trip. It is far from a conventional performance space, even by fringe standards. It is spread over two long rooms in the basement of a former warehouse on the Thames. There is no obvious stage or audience space but this makes it completely flexible. Rhesus uses both rooms in semi-promenade style very well. Excellent lighting design by Pablo Fernandez-Baz gives this stark, damp basement with challenging sight lines a polished, professional feel. The set by Zahra Mansouri is minimal, but suits the space well and the audience sit amongst it, included in the world of the play: a Trojan military camp at night. The audience sit amongst camp beds covered in burlap with a large tech desk in front. Metal pillars cut through the length of the space but the actors work around them skilfully. The direction also incorporates the stairs and doorways of the venue.

As the audience come downstairs into the space, they are individually examined by several actors and then ushered around. Characters are interacting with each other everywhere and viewers have the freedom to move around and purchase drinks. Audience members are moved if they are in the way. There is absolutely no actor-audience boundary initially, but this changes when the play properly starts. From then on, there is no contact from the performers other than being directed by ushers in costume whenever a move to the other room was required.

The text is spoken well and all of the actors seem comfortable with heightened language. The cast is predominately female, with most main roles played by women, but as women rather than as men. Language is adapted accordingly, but unnecessarily. Dressed in fatigues and heavily armed, they play the tension well. Whether or not it was intentional, due to the cast being very young (late teens to early twenties, I’d guess) it carried a disturbing reminder that many who fought in our past wars were young and child soldiers are a very real tragedy in many places around the world today. One issue with the costume was that it was too fresh and clean. This play is set nine years into the Trojan War, but their fatigues were in good shape and not dirty at all. Typical of a showcase, the performers were very well groomed and made up but this also looked out of place considering the given circumstances of the play.

The most notable features in this production are the regular movement sequences between the scenes. Some are abstract, some capture the brutality of battle and killing. All of them are impeccably choreographed and directed by Ailin Conant of Theatre-Temoin. This is a stunning example of a modern use of a Greek chorus. They vary in performance style, but they are consistently good and could be the best thing about this production.

The performances in this ensemble piece were good, but as is often the case with very young performers, few stood out. No one was particularly weak but neither was anyone outstanding. This will come with age and experience. Cheyenne Lima Fiamberti de Souza as Athena and Kirsty Hobson as Hector have the most potential though all of these performers will excel in ensemble performances as they grow and develop.

The venue is certainly worth experiencing in this well-designed production of a rarely performed play. Though a showcase, it is certainly not a difficult one to sit through.