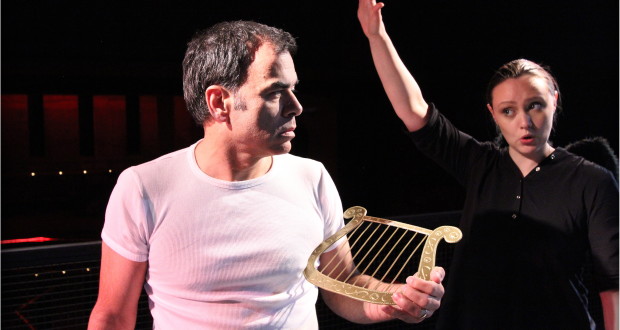 Cons: Some awkward staging that results from the singers’ proximity to the audience.
Orpheus and Eurydice, The Rose Theatre Bankside – Review

Pros: Strong and affecting vocals. Amazing venue and enchanting music. Cons: Some awkward staging that results from the singers’ proximity to the audience. As mythical love stories go, Orpheus’s descent into the underworld to rescue his wife Eurydice is as inspiring as they come. ‘Don’t look back,’ is the only instruction Orpheus is asked to follow on his quest to haul his beloved back from the dark abyss of the afterlife. Orpheus and Eurydice is Christoph Willibald Gluck’s most popular opera and is produced by Time Zone Theatre to mark the 300th anniversary of the composer’s birth. The three-act&hellip;

There’s no better time or venue to see this mythical opera that can be enjoyed by all.

As mythical love stories go, Orpheus’s descent into the underworld to rescue his wife Eurydice is as inspiring as they come. ‘Don’t look back,’ is the only instruction Orpheus is asked to follow on his quest to haul his beloved back from the dark abyss of the afterlife. Orpheus and Eurydice is Christoph Willibald Gluck’s most popular opera and is produced by Time Zone Theatre to mark the 300th anniversary of the composer’s birth. The three-act production is a slick ninety minutes with no interval and is beautifully and intelligibly translated into English by Andrew Charity.

You’d be hard-pressed to think of a better venue to present the infernal world of Hades. I had no knowledge of The Rose Theatre and so initially thought the stage was merely a small wooden platform in front of the audience. At first the singers perform up-close and personal, in the presence of a charming musical quartet made up of keyboard, violin, flute and harp. Beyond the railing behind the actors is total darkness, until a dramatic lighting change reveals the archaeological excavation that is taking place to preserve the theatre’s Elizabethan origins. Suddenly we see a huge cavernous auditorium with a big lake at its base. A lake in a theatre is a first for me! And with the water encased in red cable lights, the mythical abode of the dead never looked so good.

The acoustics are phenomenal, particularly the reverberations of Orpheus when he turns toward the underworld and curses the gods. The vocals by all are strong throughout and credit must be given to Robin Green for gallantly performing the role of Orpheus whilst under illness, and still doing it so skilfully. A community chorus perform the role of the Furies, the goddesses of vengeance on whom Orpheus must prevail. Their movements and harmonies are sublime and the moment where they approach our hero, veiled and dressed fully in black, is very powerful and haunting.

The meditative sections in the second half are more emotionally charged and this creates a space for the music to work pleasingly on the senses. The musical arrangement works so well you could enjoy it on its own. And as the drama builds, so does the intensity. I was gripped by Mimi Doulton’s piercing and consummate cries as Eurydice, who has mistaken Orpheus’ refusal to look at her as a change of his affections. Pamela Schermann’s staging is much appreciated – you always know where you are in the story and are fully convinced of the couple’s passionate torments. When Orpheus succumbs to Eurydice’s supplications and looks at her, the moment has all the drama it needs, with Mimi Doulton doing an instantaneous life-to-death drop.

The only downside to this show had to do with the few awkward moments that come with seeing the singers so close. For example, watching Orpheus trying to sing perfectly whilst undressing and redressing in a suit, with cufflinks, formal tie, and lapel flower, was more distracting than impressive – I was just waiting for him to mess it up, which mercifully he didn’t.

Gluck’s production is a quarter of a millennium old and yet it is remarkably accessible both to modern audiences and newcomers to opera. Cheerful soul that I am, I must admit to preferring tragic versions of the myth where Eurydice dies and a grief-stricken Orpheus quickly follows suit. In Gluck’s version, Orpheus’ daring pays off and so the divine warning of ‘don’t look back, or else’ becomes ‘oh, go on then …’ The ensemble cast celebrate victory and we gleefully abandon our seats for a piece of the cake they’ve brought out on stage. This certainly made the happy ending much easier to bear.