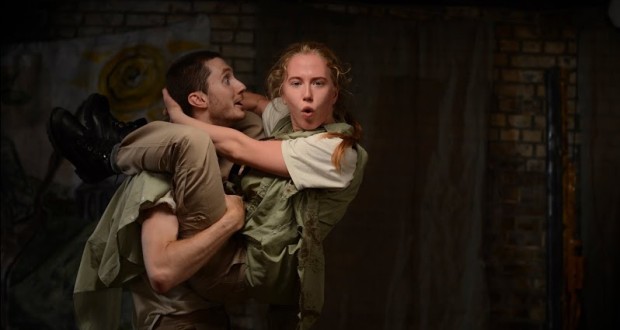 Pros: Passionate performances and some great physical comedy.
Cons: The action was sometimes too chaotic to follow.
Lysistrata, The Electrician’s Shop – Review

Pros: Passionate performances and some great physical comedy. Cons: The action was sometimes too chaotic to follow. It’s a rare sight to be met by a marching army on an otherwise ordinary walk down a disused road to the theatre venue. The abandoned quality to the Trinity Buoy Wharf on the East India Docks made me wonder whether there really was an army barracks close by. Yet this unconventional welcome from the Fourth Monkey Ensemble is one among many signs of their no-effort-spared commitment to staging this classical Greek comedy. In Aristophanes’ Lysistrata, the titular heroine forces an end&hellip;

A funny, if at times overwhelming, take on this ancient battle of the sexes.

It’s a rare sight to be met by a marching army on an otherwise ordinary walk down a disused road to the theatre venue. The abandoned quality to the Trinity Buoy Wharf on the East India Docks made me wonder whether there really was an army barracks close by. Yet this unconventional welcome from the Fourth Monkey Ensemble is one among many signs of their no-effort-spared commitment to staging this classical Greek comedy. In Aristophanes’ Lysistrata, the titular heroine forces an end to war by convincing the women to withhold sex from their husbands. By the end of the play, we have a fair idea of the foolishness of war and the eccentricities that stereotypically divide the sexes.

Director Ailin Conant’s production is wild and interactive, maintaining few of the traditional distinctions between the cast and the audience. After observing the outdoors army drill, the audience and cast descend into the basement of The Electrician’s Shop. Together at Camp Hector we enjoy some rest and relaxation. As well as drinking with our comrades, we all join in a Trojan sing-song and converse freely throughout the production, as might any raucous bunch of allied troops. As army digs go, Zahra Mansouri’s set design, with camouflaged chairs set around wooden crates, is elaborate and visually convincing.

The play benefits from a huge cast – 27 members – who display all the camaraderie and chemistry you’d expect from a repertory company. Forming the separate men’s and women’s choruses that convey a humorous rivalry, the majority of the cast also present strikingly individual caricatures. Most importantly, the lusty and suggestive scenes are funny, with enough diversity in the physical comedy to carry the innuendo and non-stop gags on all things rumpy pumpy.

Some of the laugh-out-loud moments include the women’s urgent resistance to Lysistrata’s appeal for a sex-strike and later on, their foiled attempts to sneak back to their husbands. I also enjoyed the women’s seizure and occupancy of the Acropolis, and Myrrhine’s tempting of her husband Cinesias, where she exploits his fantasy of an ideal woman to secure his political commitment. The men’s contortions, resulting from the strain of their untreated phalluses, were undeniably hilarious. Full size plastic bottles were used to represent their rigid afflictions and when squeezed they sounded royally painful!

Whilst Lysistrata is a play that demands plenty of energy, the unrelenting shrills and whoops of the cast grew very draining after a while. At points, the action was too unrestrained and disorienting. I got a bit lost toward the end of the second half, at the point where the tempting figure of peace emerges and reconciliation is brokered. The immersive aspect also held little appeal for me, as I wasn’t convinced of its importance. The cast make full use of the space, pushing past from behind the seats and jumping to from the audience. Such disturbances are part of a deliberate strategy intended to involve the audience more fully in the disorientation of life. But if you prefer to sit and observe in a relaxed and uninterrupted fashion, you’re less likely to enjoy this feature.

The neat celebratory tone that Aristophanes ends on is reached and soon overturned. The lights drop, red lights come on, and an alarm is sounded. A violent and effective war scene of killing and abuse is played out, depicting a ruthless Lysistrata who has to fight to win the war. I’m not sure this innovative leap from laugher to seriousness was needed, but it is a valiant attempt to supplant the gender stereotypes the play thrives on. And it offers a comment on the true cost of war. So overall, I would say the primary strength of this play rests on – what would surely have been Aristophanes first concern – its ability to make the audience laugh.

Previous: Be Here Now, Shoreditch Town Hall – Review
Next: This Is How We Die, Ovalhouse – Review 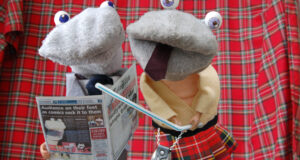