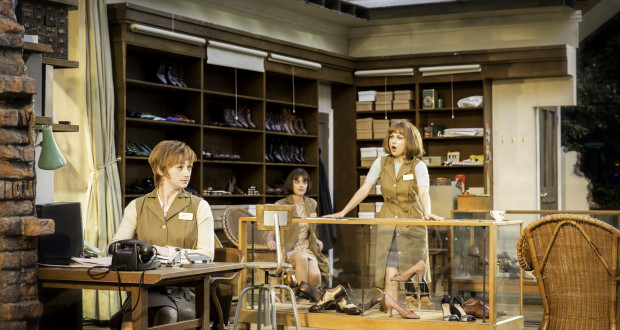 Pros: Strong acting, and good set design. Cons: It is unclear whether the 1960s setting for this Victorian play really works. This update of Harold Brighouse’s classic northern play transports the action from 1880s Victorian England to the swinging sixties. Except the sixties aren’t really swinging in Salford - there are no hippies, no revolutionaries and no acid taking drop-outs. But there are some subtle social upheavals going on; the strictures of Victorian morality are being loosened and women are beginning to experience new freedoms. Arch-patriarch and self-pitying alcoholic, Henry Hobson, played wonderfully by Mark Benton of Nationwide advert&hellip;

An interesting take on a Victorian exploration of gender and class.

This update of Harold Brighouse’s classic northern play transports the action from 1880s Victorian England to the swinging sixties. Except the sixties aren’t really swinging in Salford – there are no hippies, no revolutionaries and no acid taking drop-outs. But there are some subtle social upheavals going on; the strictures of Victorian morality are being loosened and women are beginning to experience new freedoms.

Arch-patriarch and self-pitying alcoholic, Henry Hobson, played wonderfully by Mark Benton of Nationwide advert fame, is none too happy about young Britain’s turn to mini-skirts and the pill. He intends to keep his three daughters firmly under his control, working free of charge in his shoe shop. While he grudgingly concedes that he’ll have to marry two of them off – to men of his choosing of course – the third, Maggie Hobson, he intends to keep as his shop floor manager for the rest of her days. Unlike the other two, who are just pretty “window-dressing”, Maggie is indispensable. She could sell chicken to a vegetarian. Mr. Hobson’s plans to turn his eldest daughter into a spinster are thwarted, however, when she abruptly weds the poor, but talented cobbler, Willie Mossop.

What ensues is an exploration of gender and class with a great deal of humour thrown in. The language is raw and earthy, and full of northern turns of phrase. Brighouse was an early realist, writing kitchen sink dramas long before the label even existed.

Jodie McNee’s turn as Maggie is excellent, combing resolute pragmatism with a whiff of tenderness. She has something of Cordelia about her – King Lear’s virtuous daughter – although she’s far more calculating. Maggie is the only daughter who is half-likeable. And even she’s too cold and ambitious to fully warm to. The other two are superficial and money hungry, after well-to-do husbands and the trappings of middle class urban living. It’s disappointing. All the misogynistic aspersions of the irascible Mr. Hobson are confirmed by his daughters – they turn out to be greedy and callous, with the partial exception of good old Maggie. It’s a dark irony – a play about the gender revolution of the sixties, confirms the stereotypes of its sexist protagonist.

Brighouse’s original has been reproduced many times since it was first performed in 1916, most famously as a film starring Charles Lawton and John Mills. Its difficult to say whether this new 1960s update works. The revolving set is very well done, and the acting is on the whole very strong, despite one or two sections of slightly forced dialogue. But, some of the plot seems slightly out of place for 1960s England. Talk of marriage settlements and 30 year-old women being “unmarriageable” are too Victorian and too antiquated. This vision of 1960s Salford is a little too “un-swinging” to be believable.