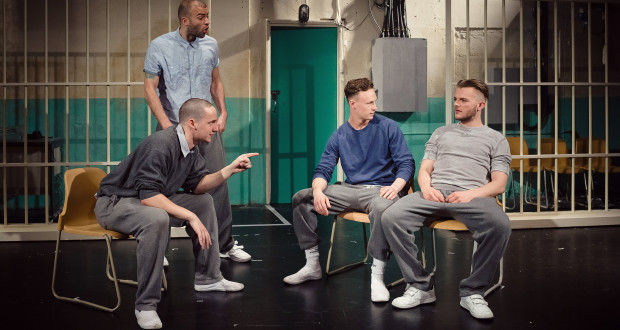 Pros: An outstanding performance by Adam Lawrence as the emotionally unstable Hamlet.

Pros: An outstanding performance by Adam Lawrence as the emotionally unstable Hamlet. Cons: Some performances didn't fit the prison setting. Contemporary takes on Shakespeare aren't new, but never have I come across one that manages to keep the main elements of the original play and the dialogue alongside such audacious staging. Hiraeth Artistic Productions’ unorthodox and lad-centric adaptation of Hamlet feels like a guilty pleasure. The play opens in a Liverpool prison. Hamlet, played by Adam Lawrence, is led through a side door inside the spacious black-box theatre. Shouts and shrills from reporters, who are waiting outside to fish&hellip;

A rediscovery of a classic. Not for everyone, but if you brave this violent and unapologetic performance, you will be a Shakespeare convert!

Contemporary takes on Shakespeare aren’t new, but never have I come across one that manages to keep the main elements of the original play and the dialogue alongside such audacious staging. Hiraeth Artistic Productions’ unorthodox and lad-centric adaptation of Hamlet feels like a guilty pleasure.

The play opens in a Liverpool prison. Hamlet, played by Adam Lawrence, is led through a side door inside the spacious black-box theatre. Shouts and shrills from reporters, who are waiting outside to fish a story, follow him in. The King, also named Hamlet, is dead, and his son is going to prison. Lawrence strips naked and the guards proceed to do a cavity search before leading him to his cell.

The ingenious staging uses sliding doors to create the prison common room, individual cells and courtyard. The cast move the doors around from scene to scene to create the enclosed areas of the facility. In between scenes, dark techno music brings a sense of foreboding, and a game of lighting creates a bold chiaroscuro. A set of chairs, a police desk and a CCTV facility complete the set.

Once Hamlet is settled in, we meet members of the band of rebels / the other prisoners, all as shady and tough-looking as each other. Horatio, (Lewis Howard), Francisco (Damian Scayg) and Bernardo (Jack Greenlees) are outside having a fag – which smelled pretty much the same as marijuana – when they encounter the ghost of the late king. I was not expecting the characterizations to be as faithful to the prison setting as they were. The strong Scouse accent, disfluency and mannerisms were exactly what you would expect, had they not been coming from Shakespeare characters. Somehow it worked, and the constant surprise of hearing Shakespeare interpreted this way – with quite a few liberties and ‘fucking’, ‘fucks’, ‘man’, that’s gay’ and such thrown in – gripped me.

The play has been shortened considerably to around two and a half hours. Some original scenes are substituted with violent encounters between the two prison gangs: those loyal to Hamlet’s father, and those who follow the new King, Hamlet’s uncle, played by Russell Bartnett. Instead of obviously choreographed stage fights, these guys seem to really go for it: bloody noses and knuckles, crotch grabbing. I feel I should give the show a PG rating.

Although there are holes in the production – for example you never find out why Hamlet has been thrown in prison – they do not nag. There is a tangible feeling of camaraderie between Hamlet and his band of rebels. Admittedly, Hamlet’s relationship with people outside of the prison – such as his love interest Ophelia, played by Jessica White, who is the prison counselor – seem disconnected. But this concern fades away in the midst of the chaos and violence that surrounds you. All the performances are fantastic but Lawrence steals the show. He gives a powerhouse performance of emotional turmoil and struggle; his Hamlet is outstanding.

This production is an unapologetic adaptation. It definitely isn’t for everyone but I’ve most certainly rediscovered Hamlet.