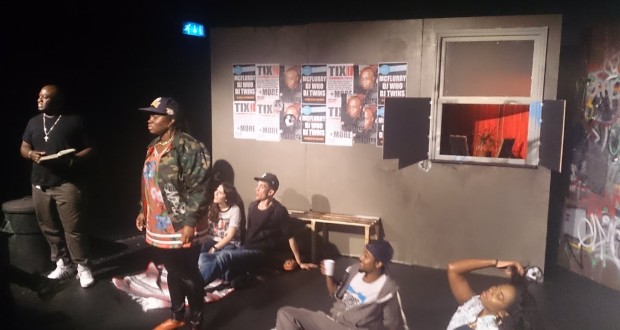 Cons: Wooden delivery and roughness around the edges in parts let it down.
Cyrano of Brixton, Brockley Jack Studio Theatre – Review

Pros: Gerel Falconer’s Cyrano is a lovable, precocious wit. Cons: Wooden delivery and roughness around the edges in parts let it down. This isn't Paris anymore. Edmond Rostand's play based on the life of poet, duelist, musician and intellect Cyrano de Bergerac has been heavily reimagined, rewritten and relocated by Kevin Lee in a thoughtful update that, although witty, has a disappointing lack of polish. The scene is set with cheeky authenticity for a local music festival. A backdrop plastered with posters for DJs and MCs reads “Brixton Splish Festival”, and fag packets, Subway wrappers and tins of Red&hellip;

A thoughtful and often funny take on a classic tale, but the flawed script, unpolished performances and design features need ironing out.

This isn’t Paris anymore. Edmond Rostand’s play based on the life of poet, duelist, musician and intellect Cyrano de Bergerac has been heavily reimagined, rewritten and relocated by Kevin Lee in a thoughtful update that, although witty, has a disappointing lack of polish.

The scene is set with cheeky authenticity for a local music festival. A backdrop plastered with posters for DJs and MCs reads “Brixton Splish Festival”, and fag packets, Subway wrappers and tins of Red Stripe are strewn across the floor. McFlurry (Marc Dehaney) is welcomed to the stage to perform his new single (which has had airplay on Flex FM), but then a small guy appears with a huge prosthetic nose to interrupt proceedings. This is Cyrano of Brixton: rapper and musician, smugly self-assured of his intellect and wit. He demands that McFlurry leaves the stage, insists that he is no good. In a fairly one-sided slanging match we then witness Cyrano’s lyrical talent.

The story remains the same as in Rostand’s play and the names of principal characters have also been kept (although Roxane has been shortened to Roxy): ugly Cyrano is in love with the intellectual beauty Roxy; and Roxy is in love with the handsome but stupid Christian. Cyrano helps Christian out by chatting to Roxy on Facebook under Christian’s name so that she will think Christian is clever, but this doesn’t work out very well. In the background is an impending gang war between north and south London crews.

The design is underwhelming – essentially just a big slab of MDF and a door. Its amateur look jars against the ambitious script. Lee’s writing is often witty, and pitches itself well to a modern, pop-culture audience: “You’re smug”, says one character to Cyrano, “I am. But you would be if you were me,” he replies. And offering lyrical compliments to Roxy Cyrano says, “If you were a film you would be a Christopher Nolan film. You get your point across so simply but you have a complexity that would take a lifetime to unravel.” Members of the cast add to the humour – particularly Rachel Amy Burns as the gormless Donna, who lopes unsubtly about the stage, always munching on a packet of Doritos and unable to take hints. At one point the backdrop turns into a phone shop offering ludicrously cheap deals and displaying the slogan “All cheap, all good”.

Gerel Falconer as Cyrano is smug and cocky, smaller than the rest of the cast but by far the biggest personality. He fearlessly takes on the gang leaders of Brixton, despite his nerdy nature. He shows skill as an actor, and the prosthetic nose looks as ridiculous on him as it should. However, the trouble with prosthetics is that they can fall off. And this is exactly what happens. For the duration of one scene Falconer stands clutching the nose that flaps about on the side of his face, like a gruesome scene from a horror film. Before the start of the next scene he announces that there’ll be no reattachment surgery and asks the audience to suspend their imagination, to “pretend that the nose is twice as big as it was before”. He handles the hiccup with admirable professionalism, and the audience is only too glad to applaud him.

There is talent prodding through from the cast and the writer, but the production is marred by a couple of drawbacks: some of the cast members deliver their lines in a stilted and perfunctory way, deadening the verve of Falconer’s delivery. Inconsistency of tone makes the script seem unpolished too: although mostly light-hearted and humorous, the ending is overblown tragedy. A long, dull epilogue scene consisting of an expository conversation between Roxy and Donna, and also between Roxy and Cyrano, completely undercuts the humour of the two hour build up. The flaws are not fatal, but they detract from a fun and worthy concept.