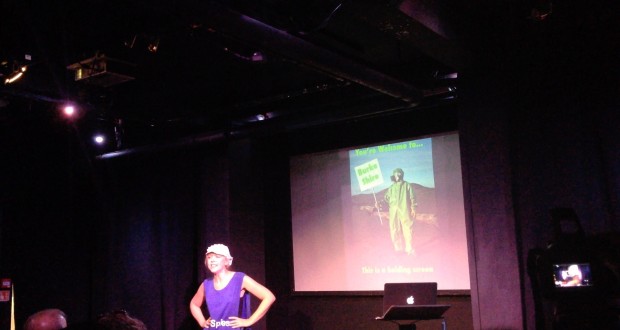 Pros: Fun, saucy and belly laugh good. Cons: Some awkward moments where live performance and technology meet. As I tore myself away from watching the England test match (that’s cricket by the way not the other sporting event sweeping the nation) and rushed into the mega-crowded Leicester Square for a comedy gig I knew very little about, I was not tremendously excited. It perhaps didn’t help that my plus one had pulled out with a shoulder injury and I was attending on my lonesome. However, buying myself the biggest glass of wine I’ve ever seen put a more positive&hellip;

Innovative and wacky. Most definitely a fun night out.

User Rating: 2.95 ( 1 votes)
As I tore myself away from watching the England test match (that’s cricket by the way not the other sporting event sweeping the nation) and rushed into the mega-crowded Leicester Square for a comedy gig I knew very little about, I was not tremendously excited. It perhaps didn’t help that my plus one had pulled out with a shoulder injury and I was attending on my lonesome. However, buying myself the biggest glass of wine I’ve ever seen put a more positive spin on matters (fancy that!).

As soon as the first of Jo Burke’s characters came onstage however, I knew I was in for a treat. Stumbling might be a better verb for our first character and makeshift host for the evening, Mary Magdalene, Mayor of Burke Shire and drunken spinster. As we go through a series of the town’s personalities, we keep coming back to Mary, she is our due north on this strange map of a weird town and is oddly comforting.

Burke hurtles through a bizarre array of characters that inhabit Burke Shire, with an equally peculiar range of accents, yet each is just as memorable as the last. There’s Scouser Jen who runs the only Jack The Ripper tour outside of London, Cockney pie maker Pat who has accidentally named her shop Pat Spies and an American professor and pharmaceutical rep who tells us we should all be embarrassed of our thumbs. Each character is so full of quirks and idiosyncrasies, that even with a short time on stage, they easily etch themselves onto the memories of audience members.

Burke mixes in live performance elements with multimedia interaction, which for the most part, work seamlessly together. Burke is ably managing all the technical elements herself, so the few slipups she makes on her second performance of this work-in-progress are permissible. There are a few moments in the first ten minutes or so where the PowerPoint elements feel awkward and you wonder why Burke doesn’t just do without. However, it later becomes such an integral part of the show, that you’d miss it if it were gone.

Perhaps the most enjoyable part of this show is that you never quite know what will happen next. Even if you know the premise, it’s impossible to guess the sort of characters that will appear as representatives of the fictional town of Burke Shire. Any characters you did come up with, wouldn’t be half as good as Burke’s creations. The sharpest move however, is possibly at the very end of the show when the audience are given free ‘Thumbaways’, the device invented by the thumb-hating American pharmaceutical rep. Burke’s twitter handle is written on each, a neat and savvy marketing trick.

Although there are few set pieces that don’t quite hit the spot in this short and sweet performance, Burke smartly glosses over these few-and-far-between uncomfortable moments. As it stands, Burke Shire is a lovely little piece and is on the edge of being quite brilliant. If you’re heading up to Edinburgh this year, you are strongly advised to check out this wacky and witty show.

Burke Shire will be at the Freestival in Edinburgh for the duration of the Fringe Festival (1 -25 Aug 2014).

Written and performed by: Jo Burke
No longer booking in London.

Writer and PR girl. Arti is a ‘one day’ kind of girl, as in ‘one day she will be writing for the theatre’, but until then, she works in the slightly exciting world of the media. Arti is definitely a words girl since graduating with an English degree years ago and loves to be inspired by the throves of new talent London seems to be producing. She thinks there is nothing more magical than a beautiful story bought to life on the stage. Outside of Everything Theatre, Arti also enjoys her useful hobbies of navel-gazing and anticipating her dinner.