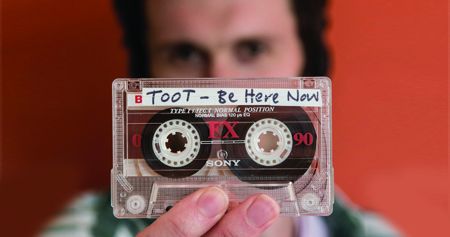 Pros: Brilliantly staged multi-sensory experience. Sterling immersive theatre. Cons: Don't go if you don't like interactive theatre. Or '90s music. When I arrived in the theatre the sickly sweet smell of the smoke machine took me straight back to the long-forgotten (and perhaps best forgotten) school discos of my youth. I then promptly sat in the wrong row, the one that performer Clare Dunn had just moments before told me they were reserving for audience members arriving last. I wasn't sure exactly which row she meant so I sat there anyway. The combination of being embarrassed about that and&hellip;

An affectionate, visceral look back at the iconic music of the performers' formative years.

When I arrived in the theatre the sickly sweet smell of the smoke machine took me straight back to the long-forgotten (and perhaps best forgotten) school discos of my youth. I then promptly sat in the wrong row, the one that performer Clare Dunn had just moments before told me they were reserving for audience members arriving last. I wasn’t sure exactly which row she meant so I sat there anyway. The combination of being embarrassed about that and the evocative smell of the smoke machine took me right back to those hyper-self-conscious years that were the 1990s for me.

So really, it was a perfect start to Be Here Now, a show all about being a teenager in a decade where the music was both intense and irreverent. When you were a teenager – no matter which decade that was – every little thing you did, every conversation you had, and the emotional intention of every mix tape you made was magnified a thousand times. It was all Very Important. In a nostalgic romp through the decade of their impressionable youth Clare Dunn, Stuart Barter and Terry O’Donovan present a variety of iconic ’90s elements: portable stereos, that specifically ’90s brand of pop choreography, and pop posters blue-tacked to the wall. Through scenes that are interactive without being intrusive, TOOT asks the audience to be complicit in the re-enactment of their teenage years. Audience participation can often come off awkwardly, but I think something about remembering how awkward it really did feel to be a teenager makes the interactive element of this show work particularly well.

There are serious parts too, particularly Dunn’s scene examining the relationship we have with our past selves. We remember here how at the most unexpected times the past can disrupt the present, shaking up everything we think is most solid in our lives. Terry O’Donovan’s confessional monologues to a poster of Kylie Minogue are both funny and poignant. And Stuart Barter’s moments explaining the very intense business of getting exactly the right song at exactly the right time really took me back to all the careful plotting of adolescence; the dreaming and planning and rehearsing in one’s head that so often went catastrophically awry.

During the show TOOT ask the audience to fill out a little card with a song that reminds you of your first love. I pick a song that doesn’t remind me of my first love but does remind me of the first guy I went out with. I was fifteen and he was seventeen, and I liked him because he wore a fedora to school every day. This is a guy whose phone conversations mainly consisted of intense, heartfelt silences. This is a guy who married the very next girl he went out with after me. It’s such a silly little nothing of a song; something I would have been embarrassed to admit I liked even at the time. I decline to tell you what it was even on pain of death. At the end of the show the audience are presented with their answers and get to hear their songs again.

Somehow TOOT creates a wondrous atmosphere where it really is like hearing that song again for the very first time. Looking around it’s clear that people are transported: some are embarrassed by their song, some are overwrought, and some are enraptured. And in that moment that one not-to-be-named song, that puerile, schmaltzy, pop-slush song, that song distils every flavour of youth into a single earnestly sweet and yearning melody.

Put down the cold cynicism of whatever age you are now and go be a sincere teenager with TOOT. Then after the show check out their Spotify mixtape – after all, there have to be way more embarrassing songs on there than yours.

Previous: No strings attached (sort of)
Next: Lysistrata, The Electrician’s Shop – Review